Letters: Other views on Enbridge, Prop 1

Shamla writes: "Enbridge will be responsible for all costs of designing, constructing, operating, and maintaining the tunnel."

Letters: Other views on Enbridge, Prop 1 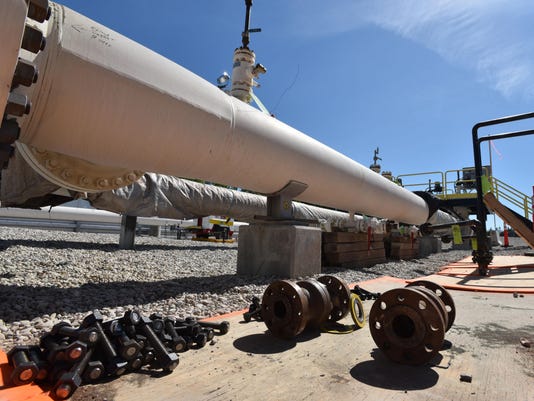 Shamla writes: "Enbridge will be responsible for all costs of designing, constructing, operating, and maintaining the tunnel."(Photo: Dale G. Young / The Detroit News)Buy Photo

In October Enbridge entered into a second agreement with the State of Michigan on the future of Line 5, a vital part of Michigan’s energy infrastructure on which Michigan residents and businesses have relied for more than 65 years.

Along with additional measures to protect the waters of the Straits and the Great Lakes, the agreement with the State identified the best long-term option for the replacement of Line 5 in the Straits is construction of a tunnel to house Line 5. A tunnel under the lakebed would reduce the likelihood of a release into the Straits and protect the pipeline from an anchor strike.

Enbridge will be responsible for all costs of designing, constructing, operating, and maintaining the tunnel. No taxpayer dollars will be used. Enbridge is committed to protecting the Great Lakes while safely meeting Michigan’s energy needs. New infrastructure that connects the peninsulas will continue to put Michigan at the forefront of stewardship of the Great Lakes and enhance the region’s economic prosperity through energy security.

We agree and support the state’s proposal that the Mackinac Bridge Authority, which has a long and proven record of vital infrastructure oversight involving the Straits, is a logical choice to have the responsibility of owning and overseeing the tunnel.

We look forward to working with the Authority, State leaders, construction trades and Straits-area communities to build the next generation of vital energy infrastructure to serve Michigan. Safe energy delivery is paramount, and Enbridge is leading the way.

Re: The Nov. 14 guest opinion piece, "Marijuana battle is not over":  Some clarification is needed.

First, regarding the myth that communities have to reject legalized cannabis businesses or they will "be implemented into every local community unless they choose to opt out..." There is no "opt-in" or "opt-out" requirement contained within the Proposal 1 language, nor has there been a directive from a state agency requiring such action.

Before a municipality can host businesses described under either the medical business program or the congruent business outline created by the Prop. 1 language, they must first pass zoning ordinances and have open meetings. No business can suddenly spring up in a town's midst without city approval. No opt out ordinance, letter or action is necessary to control cannabis businesses in a community. Period. This falsehood was oft repeated in pre-election campaign materials and has induced several cities to enact these rules, which are developed at a cost to the city but carry no benefit.

Secondly, citizens who grow cannabis legally in their home are not allowed to "sell and exchange... within 1,000 feet of a school or church," as the editorial states. Citizens are not empowered to sell cannabis under Prop. 1. If a community chooses to empower a licensed legal or medical marijuana distribution center to operate within 1,000 feet of a school they must zone the businesses for that activity. Citizen directed initiatives cannot dictate zoning rules.

Thirdly, several fear-mongering statements about intoxicated driving, increased incarceration rates and THC levels are all misfires. An estimated 1.3 million Michigan residents already use cannabis and we have seen no evidence that they cause driving problems; there is no reason this would change due to Prop. 1 Incarceration rates will fall due to Prop 1, not increase. Prop 1 requires maximum THC levels to be established for marijuana infused products.