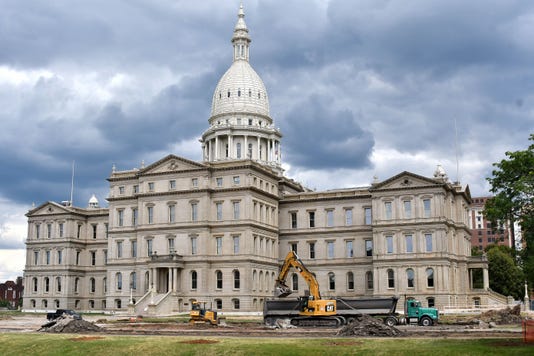 Excavators tear-up the parking lot Monday, August 14, 2017, behind the Michigan Capitol building where wells will be drilled to provide geothermal heating and cooling for the building.(Photo: Dale G. Young, The Detroit News)Buy Photo

With the midterms now behind us, lawmakers should focus on eliminating one of the biggest barriers to creating jobs in Michigan: occupational licensing. Once limited to fields like medicine and dentistry, licensing laws have spread dramatically in recent years. Today, nearly 750,000 Michigan workers need a license to work. That’s almost one-fifth of the state’s workforce. By comparison, during the 1950s, just 5 percent of American workers were licensed.

In Michigan, the average occupational license for a lower-income occupation requires $242 in fees, 255 days of education and experience, and two exams. These barriers to entry for aspiring workers restrict competition in licensed occupations, limiting economic opportunity and driving up costs for consumers. Now a new Institute for Justice report by Morris Kleiner, professor at the University of Minnesota’s Humphrey School of Public Affairs, and economist Evgeny Vorotnikov shows the enormous costs licensing imposes on Michigan’s economy.

In Michigan, licensing results in almost 80,000 fewer jobs. With licensing laws limiting the pool of people who can work in a licensed occupation, those with a license can charge more for their services than they could in a more competitive market. As a result, licensing costs the state’s economy $405 million in “deadweight loss,” or reduced economic output, each year.

But even that figure doesn’t capture all of the economic costs of licensing. For instance, it doesn’t include the time and money people waste completing excessive licensing requirements. Nor does it account for the lost potential of people who want to work in a given field but are blocked by licensing.

Defenders of licensing often claim licenses are necessary to ensure quality and to protect the public’s health and safety. But when the Obama administration’s economic advisers examined occupational licensing in a 2015 white paper, they noted that “in a number of other studies, licensing did not increase the quality of goods and services.”

Moreover, licensing burdens are often wildly disproportionate to the actual health and safety risks associated with an occupation. For instance, in Michigan, it takes 1,500 hours of classes to become licensed to cut and style hair as a cosmetologist. In contrast, it takes only 194 hours of training to become licensed to provide lifesaving aid as an emergency medical technician. Rather than protect the public from harm, many licenses only protect the licensed from competition.

To slash through Michigan’s thicket of licensing red tape, policymakers should rigorously review licensing laws on the books, as Nebraska recently pledged to do, as well as proposed licensing regimes, as Colorado has done for years. In both cases, the key is to study whether licensing actually protects the public from real, substantial harms—and whether less restrictive, more targeted regulations, like inspections or voluntary certification, can address consumer protection concerns without the job losses and steep costs from licensing.

Given the high costs and scant public benefits of licensing, policymakers can and should repeal needless licenses, replacing them, if necessary, with less restrictive regulations. By letting Michiganders earn a living instead of a license, they can create more jobs, expand economic opportunity, and inject billions of dollars into the state’s economy.

Nick Sibilla is a legislative analyst at the Institute for Justice.