Newman: Bush was a funny, gracious man, and my mentor

The author writes: "He never raised his voice, and even when you could tell he wasn’t thrilled, he was always a gentleman"

Newman: Bush was a funny, gracious man, and my mentor 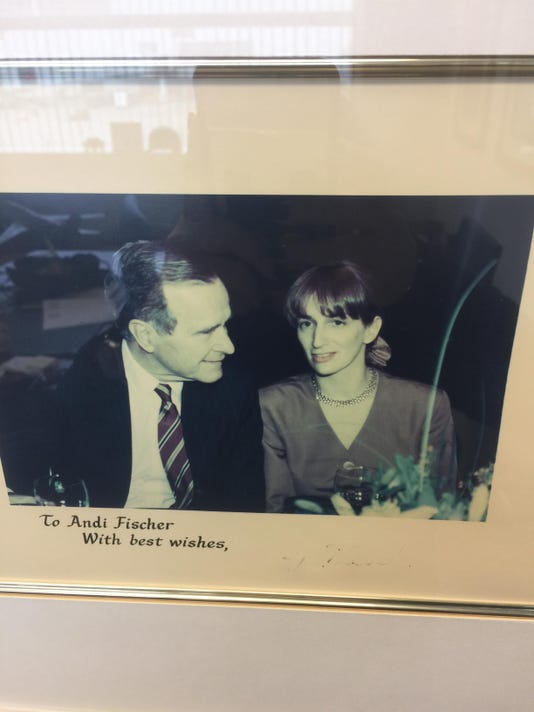 Correction: This column has been updated to reflect the correct spelling of Andrea Fischer Newman's name.

In January of 1982, I got a call asking if I wanted to help advance Vice President George H.W. Bush’s trip to the Super Bowl in Pontiac.

And although I had met him briefly before at the 1980 Republican National Convention, the Super Bowl was my first introduction to what a kind and lovely man he was. Especially when we spent hours in snarled traffic.

For the next three years, while I finished law school and during my first year as an associate at a Washington D.C. law firm, I worked as a part-time advance person for Vice President Bush. I traveled to Great Neck, New York, Milwaukee, Wisconsin, and then on to Budapest, Seoul, Moscow (for a couple of funerals) and even New Delhi and Agra, India, among other places.

It was my introduction to the world, to politics and to the man.

He never raised his voice, and even when you could tell he wasn’t thrilled, he was always a gentleman. He always thanked his staff, listened to us and made sure we knew how appreciated we were.

When we visited the Taj Mahal, he posed for pictures with every member of the staff. On one trip to Puerto Rico, I had to take something up to his suite early in the morning before the day started – he answered the door in his pajamas and asked me to come in (Mrs. Bush was there too) and shared the Sunday funnies with me. He thought they were hysterical.

In early 1985, I got another call, this one asking me to join his White House staff as Deputy Assistant to the President for Scheduling. I was 24 and the Scheduler to the Vice President of the United States. I worked across the hall from him in the Old Executive Office Building. All the external scheduling requests came across my desk.

I learned early on that NO did not always mean NO. The Vice President had a lot of friends from many years in public service, and he was also thinking about a run in 1988, and many times after we had declined an invitation someone would call him directly and he would agree to attend the event, necessitating more changes.

There were hundreds of invitations. He worked incredibly hard every day. He loved foreign policy and he seemed to know everyone.

I recall scheduling meetings with foreign leaders, political leaders (Lee Atwater and John Engler come to mind), influential business leaders like Max Fisher and members of the House and Senate.

After I left Washington DC and moved back home to Michigan in 1987, I got involved in his campaign for president – doing both advance and fundraising. After he won, I chose to stay home and not go back to Washington, but he stayed in touch, checking up on me when he came to Michigan.

After I went to work for Northwest Airlines in 1995, and he was no longer President, he and Mrs. Bush were taking a trip to China and flying through Detroit.

I wasn’t in that day, but he asked to see my office. He sat at my desk and wrote me a lovely note telling me he was sorry he had missed me and that he hoped to see me on future travels.

The last time I saw him was the summer of 2009 in Kennebunkport. He invited six of us who were traveling together over for afternoon cocktails. The bar was set up on a window ledge (somewhere I have pictures) and we had cocktails and conversation and then a wonderful tour of Walker’s Point. He couldn’t have been more gracious and wonderful.

That’s who George H.W. Bush was, both as a man and as a president.