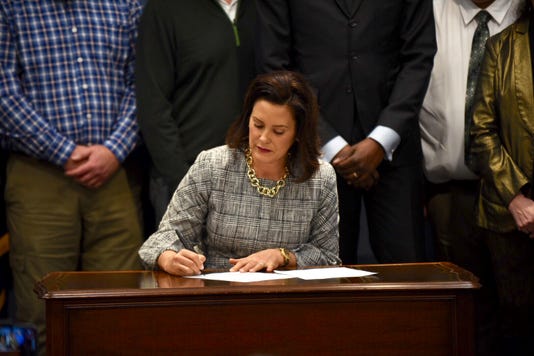 With its new Democratic governor and a Republican-controlled legislature, Michigan is back to looking for topics of bipartisan agreement, which is potentially bad news for everyone in the state who doesn’t cash economic development subsidy checks.

While the people of Michigan may be divided politically, we can still come together as one to tell our state’s new leaders that we don’t want more useless corporate welfare deals that hurt our communities and stick families and small businesses with the bill.

These “economic development” programs that make huge handouts to big corporations so they will supposedly create jobs are among the few things that get politicians working together in bipartisan harmony. They’re perennially popular with politicians as an easy way to take credit with voters for attracting jobs to the community.

Which, of course, isn’t actually what happens. As the entire nation saw during the drama of Amazon’s national search for its “HQ2” location, subsidies don’t determine business decisions. Plenty of other regions’ proposals offered billions of dollars more than New York or Virginia, and Amazon’s leaders have admitted the size and scope of incentives were a secondary concern at best. Amazon chose the locations for its new facilities exactly where it made the most business sense for them to be. The jobs are going to be created where Amazon’s customers are and where the workers to fill those jobs are already located.

In other words, the jobs aren’t “going elsewhere” if Michigan’s elected officials don’t hand out new subsidies in a fit of bipartisan harmony. The jobs will come here if there’s a business reason for those jobs to be here, and they won’t if there isn’t. There’s no need to increase the tax burden on workers and small businesses and mortgage the future of critical public services such as schools, roads, police, fire, EMS and more for no good reason.

Fortunately, Americans from across the political spectrum are coming to understand that we share common cause when it comes to these state and local corporate welfare programs. Broadly, conservatives and limited government types tend to oppose the government interference in the free market. Liberals and progressives generally dislike private businesses draining government programs for profit.

From whatever angle you come at it personally, there’s a growing agreement that this isn’t a Right versus Left battle, but rather a case of “Us versus Them” — people with power are making business and government work to their own benefit while the rest of us pay the cost.

Whether you’re more likely to call it “The Swamp” or “The One Percent,” this is exactly the kind of rigging of the system by political and business elites that has so many Americans unhappy with the state of our nation’s institutions.

Unless something radical happens, the stage is set for more of this in Michigan. Gov. Gretchen Whitmer supports expanded subsidy and incentive programs, and promised in her campaign’s economic policy plan to “unleash the Michigan Economic Development Corporation.” Republicans are largely on board, as in 2017 when then-Gov. Rick Snyder and a Republican-controlled legislature passed a new billion-dollar “transformational brownfield” law that for the first time redirects personal income taxes paid by the people who build, live and work in giant new buildings into the pockets of developers like Dan Gilbert.

Bipartisanship is all well and good, but it’s time for the people of Michigan to tell our leaders that we don’t want bipartisan corporate welfare programs. Rather, it’s time for them to represent our best interests for a change, leaving that money in our pockets and in our communities where it will do the most good for everyone.

John C. Mozena is the president of the Center for Economic Accountability.