The authors write: "Walmart and Amazon have the resources to comply with thousands of tax jurisdictions; upstart rivals do not."

Last June the Supreme Court overturned years of legal precedent and effectively granted states greater taxing powers over transactions that involve out-of-state retailers. The Supreme Court’s decision in this case, known as South Dakota v. Wayfair, makes it easier for Michigan’s Treasury to raise revenue — an estimated $200 million-plus per year, according to published estimates.  Yet taking advantage of this “opportunity” means pulling more taxes from the wallets of Michigan taxpayers while imposing job-killing compliance burdens on small and medium-sized businesses that sell products online.

This new taxing power is not derived from thoughtfully introduced legislation from our representatives with input from citizens and the business community. It was instead imposed unilaterally last August by Michigan’s administrative state, using Wayfair as justification. In other words, state bureaucrats simply declared via a three page “Revenue Administrative Bulletin” that taxes on sales originating from out-of-state retailers are to be collected from Michigan consumers. This was the wrong approach and one that should be rectified by our elected representatives through a proper legislative process.

The Wayfair case arose after South Dakota adopted a law to compel out of-state sellers to collect and remit taxes to South Dakota if they sell at least $100,000 worth of goods into the state or have at least 200 transactions with South Dakota customers. Prior to Wayfair, long-standing Supreme Court precedent had dictated that businesses must only pay sales tax in states where they maintain a physical presence. So when online retailers challenged South Dakota’s new tax-compliance mandate, they had the law on their side. But despite early wins in lower courts, the Supreme Court overturned its precedent.

States — including Michigan — had long tried to surmount the “physical presence” restrictions and tax businesses outside their geographic jurisdiction. Indeed, during the 2000s, the Great Lakes State signed on to the Streamlined State Sales and Use Tax Agreement, an effort to secure new taxing power over interstate transactions while simplifying compliance.

Revenue bulletins are simply too limited in scope to satisfactorily answer the complex legal and logistical questions that arise out of tax issues. Even South Dakota, whose legislation was the basis of the Wayfair case, felt that it was necessary to draft a new law implementing elements of the Supreme Court opinion, rather than relying on administrative action. And yet, out-of-state retailers doing business with Michigan residents will now have to comply with our tax regulations, in addition to those of roughly 12,000 other jurisdictions.

The state Treasury Department, in its revenue bulletin on the matter, described three ways a business might be required to collect such taxes. The first two are outlined in statutory law and subsequent regulations approved by Michigan lawmakers. The third, however, is simply, “a seller can have economic presence as discussed in Wayfair.” That’s it. Treasury has simply commanded that businesses comply with a new tax regime that, if other states follow suit, could subject online sellers to as many as 12,000 taxing jurisdictions in the United States.

Necessarily, more revenue for the government means less money for Michigan citizens. It is true that residents were already required to pay taxes to the state for their online purchases, an oft-shirked responsibility but a state mandate nonetheless. But instead of more aggressively pursuing this uncollected revenue, Michigan is essentially pushing the burden of collection on to small- and medium-sized businesses that lack the administrative capabilities to carry it out. While this is politically easier, as these out-of-state small-business owners do not have the power to vote and lack the political punch to make their protestations heard, it’s a bad way to make policy, with equally bad results.

The administrative complexities of the law will also put small and medium-sized businesses at a competitive disadvantage with their biggest rivals, many of whom supported the Wayfair decision. The internet had served as an equalizer for small businesses, allowing them to reach a large market and immediately compete with established businesses. No longer. Walmart and Amazon have the resources to comply with thousands of tax jurisdictions; upstart rivals do not.

The Michigan Legislature should rein in the regulatory state post-Wayfair. Allowing legislators to punt responsibility to bureaucrats reduces the control Michiganians have over the functioning of their government and can result in bad policy. Michigan legislators should consider making compliance a statutory matter, build in protections against retroactive tax collection, implement higher revenue thresholds, and consider offsetting any new revenues with tax cuts elsewhere. 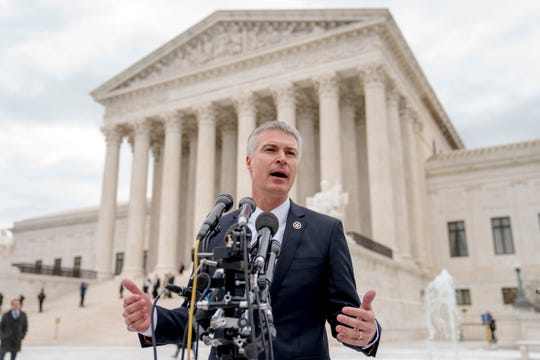 South Dakota Attorney General Marty Jackley speaks outside the Supreme Court after the court hears oral arguments on a case involving a rule stemming from two, decades-old Supreme Court cases on state's sales tax collection, Tuesday, April 17, 2018, in Washington. South Dakota v. Wayfair is a case arguing about whether a rule the Supreme Court announced decades ago in a case involving a catalog retailer should still apply in the age of the internet. (AP Photo/Andrew Harnik) (Photo: Andrew Harnik, AP)

Andrew Wilford is policy analyst at the National Taxpayer’s Union in Washington, D.C.