"The case asks whether the large social media platforms, which already control so much of our public discourse, should enjoy immunity from our laws."

A book defames you — making horrible and false claims about your competence as a lawyer. Both injured and incensed, you immediately sue the book’s author and receive a favorable judgment. You then go to a bookstore which sells this vile, defamatory book and ask the store to remove the book from its shelves. The bookstore owner refuses. 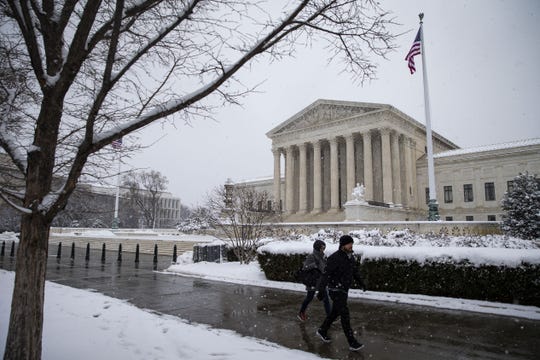 "The case asks whether the large social media platforms, which already control so much of our public discourse, should enjoy immunity from our laws." (Photo: Al Drago, Getty Images)

Under a centuries-old common law rule still in force, a court can order a bookstore to remove a libelous book. It is true that distributors of content, such as bookstores, libraries, as well as conduits such as telegraphs, enjoy a qualified immunity in defamation — they have no obligation to fact check every book on their shelves or message they carry. But, this immunity is qualified: If they know the content they carry is defamatory, they must remove it.

Except on the internet. Under a strained, flawed reading of a federal statute, section 230 of the Communications Decency Act, some courts have ruled that this common sense, common law rule does not apply to internet. While the case law on 230 is a complete muddle, courts gradually have given tech platforms more and more power, often in cases involving unsophisticated plaintiffs suing some of the biggest tech companies in the world. This has led to lower court precedents which are completely at odds with the law’s explicit intent. As a result, the giant social network platforms such as Facebook and Twitter, which have become laws unto themselves, enjoy immunity from injunctive orders requiring them to remove defamatory and other unlawful content.

But this may change. The Supreme Court ordered the defendant in the case, Hassell v. Dawn, to respond to a petition of certiorari sought from the California Supreme Court. In Hassell, a disgruntled client, Ava Bird, made libelous claims on Yelp about her former lawyer, Dawn Hassell and the law firm she worked for. Hassell and her firm brought a successful defamation suit against Bird that resulted in a court award of $557,918.85, a permanent injunction against Bird, and an injunction instructing the online forum to remove the defamatory statements.

While successful in the lower courts, the California Supreme Court, in a plurality opinion, held that the trial court, in effect, treated Yelp as  "liable" for the defamatory statements  in violation of Section 230.

Beyond the meaning of “liability” in Section 230, this case asks whether the large social media platforms, which already control so much of our public discourse, should enjoy immunity from our laws. Ironically, the large social media platforms use Section 230 as a shield to impose their own speech codes, often silencing controversial figures and, according to some reports, discriminating against politicians and thinkers with whom they disagree. It seems a twisted result that Section 230 allows the social media to ignore court orders—yet impose their own restrictive speech policies.

This result turns upside down Congress’s desire in Section 230 to build on the internet’s ability to build “true diversity of political discourse, unique opportunities for cultural development, and myriad avenues for intellectual activity.”

Passed in the mid-1990s Section 230 was intended to hekp the early internet providers such as AOL and Prodigy avoid crushing liability for every comment made on their platforms.

While Congress wanted these early internet firms the chance to flourish without the fear of destructive liability costs, Congress did not want section 230 to permit platforms to harbor unlawful material and flout court orders. Rather, Congress no doubt wanted to keep old common law rule that content distributors, whether a bookstore, Yelp, or Facebook, must remove unlawful and injurious material upon notice or injunction.

In Hassell v. Bird, the Supreme Court has the chance to set things right.

Adam Candeub is a Professor of Law at Michigan State University.