Once my generation begins to realize that these programs will come at their personal expense, their support for Democrats may wane, Naida writes 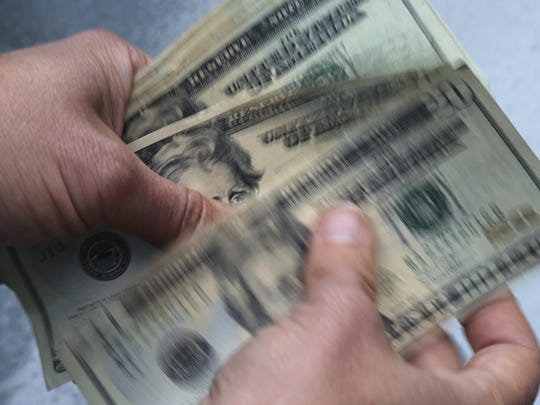 Student loans make up the majority of the $1.005 trillion owed by millennials, followed by mortgage debt. (Photo: Elise Amendola / AP)

Young people are flooding the city of Detroit, living in overpriced studio apartments downtown, beginning their careers, and, at least in the 2018 midterm elections, voting Democrat.

But if their support for the Democratic Party's legislative agenda results in higher taxes, expect young people to begin searching for a fiscally responsible political alternative.

Democratic Reps. Rashida Tlaib, D-Detroit, and Brenda Lawrence, D-Southfield, whose districts split the city in two, could see their constituencies change in the future.

Take Tlaib as an example. In her first three months as representative of Michigan’s 13th district, she has helped advance costly legislation including Medicare for All, a federal subsidy for student debt, grants to state and local governments to buy back guns, federally subsidized child care, a $300 per-child monthly tax credit for families, and a $7.5 billion infrastructure plan.

If these plans become reality, the costs will add up quickly.

Something’s gotta give. Money for these expensive projects won’t come as a result of austerity measures in other sections of government. As always, taxpayers will bear the cost of government expansion.

And, in the end, young Detroiters like me don't want to pay up.

Though Democrats have gained popularity among millennials — who range in age from 22-37 — by supporting LGBTQ rights, Medicare for All, the Green New Deal and a raise in the federal minimum wage, once my generation begins to realize that these programs will come at their personal expense, their support for Democrats may wane.

Though they have been able to vote since they turned 18, many millennials have never filed their own taxes or paid for their own health care plans.

But as the generation ages and begins to marry and buy homes, millennials will find tax policy more important and will hate increases just as much as the boomers and Gen-Xers before them.

And its not like young professional have much extra cash to spend.

Most millennials have student debt. This, along with unscrupulous spending habits, causes more than half to carry over balances on their credit cards each month and report they are living paycheck to paycheck.

And despite all the the talk by millennial maven Rep. Alexandria Ocasio-Cortez, D-New York, and others about raising the marginal income tax rate on the most wealthy to an astronomical percentage, that won’t fill the giant hole that Medicare for All or the Green New Deal would blow in the national budget.

Taxes will have to rise across the board.

And according to Ekins, support for government policies drop sharply if they include a tax increase.

Once millennials realize that government expansion keeps them from top-shelf booze, food delivery service and hot yoga classes — not to mention home ownership — you can bet their belief in sweeping federal programs will become less than ironclad.

A tax raise could turn the newly energized young voters of the 2018 midterms into voters who care more about fiscal responsibility than about those costly projects Democrats claim we can’t afford not to have.