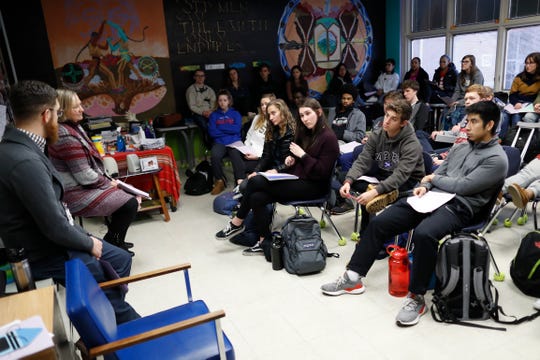 If you are under the impression that Socrates, Plato, Julius Caesar (or any Caesar), Moses, Jesus, Buddha, Mohammad, Alexander the Great, Columbus, James Madison, Napoleon, Lenin, Stalin, Mao, FDR, or Martin Luther King Jr. are important historical figures that should be taught to every child, the Michigan Department of Education begs to differ.

In an astounding draft set of K-12 social studies standards that were received by the State Board of Education earlier this week, these key individuals are not required content.

Although some of the individuals or events might be suggested as examples, or there may be a hope that some might be taught even if not mandated, the cold hard reality is that if the standards are adopted, that a student could attend 13 years of public schooling in Michigan and never hear of any of them. This is more likely than one might suppose, because only mandatory content can be state tested, and none of this is mandatory.

The standards are also imprecise, unclear, and ill-defined. Although the standards drafting committee was presented with clearly defined and helpful terms by a focus group civics committee, the drafting committee rejected those proposals and instead adopted at least 17 different terms in addressing America’s democratic values and constitutional principles.

Words have meaning. Either the drafters carefully chose these words but failed to explain them, or they utterly failed to consider the confusion using these various terms might bring to teachers. Either way, the attempt to carefully craft and use defined terms has been rejected for chaos in the classroom.

The standards are also biased by highlighting the progressive movement and censoring the conservative movement.

A prior 2018 draft attempted to add balance by adding a few references to the conservative movement. The current draft censors those references, and doubles down in favor of the progressive movement.

Reagan and any reference to conservatives is deleted. However, over 20 examples for the Progressive Era exist in one standard alone. Suffragette and peace activist Carrie Chapman Catt is mentioned two times in that same standard. The tragedy and bias here is self-evident.

The standards also give short shrift to the right to alter or abolish an oppressive government — the lynchpin of the Declaration of Independence; embrace the “social contract” — a foreign concept posited by Rousseau which led to the guillotine; and improperly refer to “individual rights” when unalienable rights is the centerpiece of our liberty.

Instead of following the state board’s directive to encourage higher order thinking and inquiry based instruction, it consistently undermines those concepts. A state mandate about the Michigan Constitution is subverted. The many other critiques are too numerous or complex to mention here.

If Michigan desires to lead the nation in quality, historical accuracy, and critical thinking, the standards need a major improvement. Michigan’s overall educational achievement ranking has fallen dramatically over the last several years. The social studies standards are an opportunity to reverse this regrettable trend.

The standards have been sent out for public input and are scheduled to return to the State Board of Education in June. Make your voice heard and demand politically neutral, historically accurate, precisely drafted, and rigorous standards.

Michael Warren is an Oakland County Circuit Court judge who served as a focus group and task force member for the revision of the social studies standards.