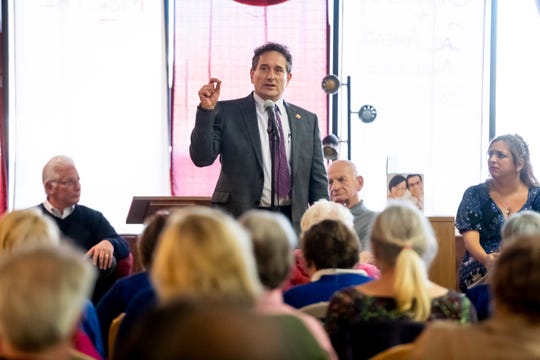 According to U.S. Census data, the largest Iraqi-born community out of any congressional district in the country resides in Michigan’s 9th.

That community is in crisis right now as many of its members face legal peril following a decision by the 6th Circuit Court of Appeals that allows Immigration and Customs Enforcement (ICE) to begin the wholesale detention and deportation of Iraqi nationals.

This is the latest and perhaps most devastating development in a years-long saga that has suspended hundreds of Iraqis in legal limbo, wondering if they will be allowed to stay in the country that has long been their home or forced back to an unfamiliar place to be at risk of persecution.

Americanization alone is enough for a deported Iraqi national to be made unsafe. Many nationals have been here for decades or were brought over as children and never learned to speak Arabic.

Chaldean Christians, a religious minority that faces faith-based persecution in Iraq, make up a large portion of the Iraqi nationals who may be deported.

But imagine the threat of danger a person might face if they served in the American military and were then forced to resettle in an unfamiliar village controlled until recently by the Islamic State.

For Ashourina Slewo, this isn’t hard to imagine. It’s what her father will face if he is deported. Slewo and her father live in Madison Heights and, as of this week, they live in daily fear that an ICE agent may knock on their door and take him away.

Slewo fears that if her father is forced back to Iraq, they’ll soon be planning a funeral without a body. And that’s not hyperbole — she hears regularly from her Chaldean extended family in Iraq that conditions there are simply not safe for them. And they would be much worse for her father.

The U.S. State Department currently warns against any travel to Iraq due to terrorism, armed conflict, and the risk of violence, kidnapping and death.

A military veteran of both the Iraqi and American Armies and a person of Christian faith, Slewo’s father just wants his case to be heard and judged individually — not in bulk or as part of a monolithic group.

Slewo spoke at a press conference I convened at the Chaldean Community Foundation earlier this month. She was joined by individuals facing deportation and their family members who all had one simple request: give us fairness.

That’s what 23 bipartisan lawmakers from around the country asked for in a letter led by Republican Congressman John Moolenaar and me to the heads of the Department of Homeland Security and ICE. And today, as I continue to have conversations with lawmakers, support for this principle of fairness grows.

This is about justice, and it is about humanity.

Give these people a chance to have their cases heard individually and judged on their own merits.

This would be a reasonable, just course of action for a group that is spread out all over the country, and of varied faiths, ethnicities and political beliefs. Just as these people are nuanced, so are their immigration cases.

In Congress right now, we’re working toward a legislative solution to provide relief to Iraqis facing deportation. But though we work swiftly, these families deserve clarity on their immediate fates.

Iraqis should know that they have many allies in this effort. Lawmakers will continue working with each other, with leaders in the Chaldean and Muslim communities, immigration justice advocates and others to push for a just outcome.

For Slewo, her father and hundreds and others, we won’t stop fighting.