"As Rep. Mitchell knows, any such tax hikes could make flying through Detroit Metro Airport prohibitively expensive for working-class families" 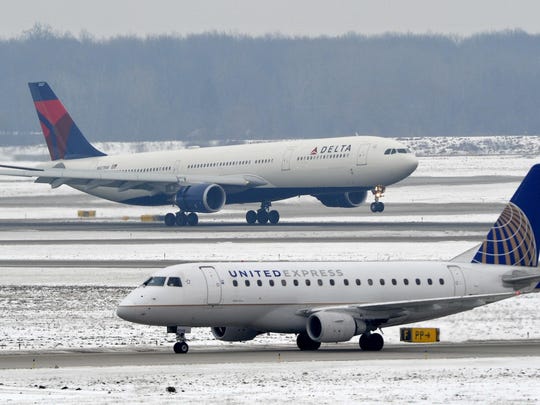 A United Express jet taxis as a Delta airliner touches down at Metro Airport. (Photo: Todd McInturf / The Detroit News)

Some members of Congress want to make flying more expensive. At the urging of airport executives, these lawmakers are proposing higher taxes on airline tickets to raise money for airport infrastructure projects.

Fortunately, our own Rep. Paul Mitchell is fighting back. At a recent House Transportation and Infrastructure Committee hearing, he exposed the proposed hike as an unnecessary cash grab.  Under his polite but persistent questioning, airport officials conceded that their existing sources of funding were adequate.

The tax in question is called the passenger facility charge — a hidden fee included on most airline tickets. Airlines collect the PFC and pass it along to the 360 airports that currently demand it, including 98 of 100 busiest nationwide.

Currently, the charge is capped at $4.50 per flight leg, with a maximum round-trip charge of $18 per passenger. Now, however, Washington is considering legislation that would raise the cap to $34 per passenger — an increase of more than 85 percent — or remove the cap completely.

Passengers are already paying their fair share. Air travelers paid a total of $3.28 billion in PFCs in 2017. And already, the average $300 airline ticket for a one-stop, round-trip flight includes $64 in federal fees. That's about 20 percent on top of the airfare.

Last year, passenger traffic at Detroit Metro Airport (DTW) rose to 35 million, the highest level since 2007. The Wayne County Airport Authority, which runs DTW, is planning to construct an additional runway and associated taxiways to accommodate the rise in passengers.

DTW was easily able to fund the project by selling bonds against anticipated revenue.  With its investment-grade credit ratings — an A from Fitch, A2 from Moody's, A from Standard & Poor's — the Wayne County Airport Authority has just closed a $231.9 million public bond offering, which it will use for its new construction and renovation.

U.S. airports have more than $14 billion in cash reserves on hand.  And an Aviation Trust Fund for infrastructure currently has a balance of $7 billion, a number the Congressional Budget Office expects to increase to over $47 billion by 2029.

Airport executives are using "infrastructure needs" as an excuse for taking more of passengers' hard-earned money.

Luckily, Rep. Mitchell has travelers' backs. At the House Transportation and Infrastructure Committee hearing, he challenged airport executives to name a single project they had been unable to fund due to a lack of capital. They couldn't.

A PFC increase could considerably increase the cost of a family vacation or make it tougher for Michigan small business owners to travel for conferences and sales trips.

Mitchell deserves immense credit for trying to protect Michigan families and businesses. Hopefully, his fellow lawmakers will stand with him and reject this unwarranted tax hike.