Barr accurately conveyed the investigation had exonerated Trump and his administration of criminal conspiracy or coordination with the Russians. 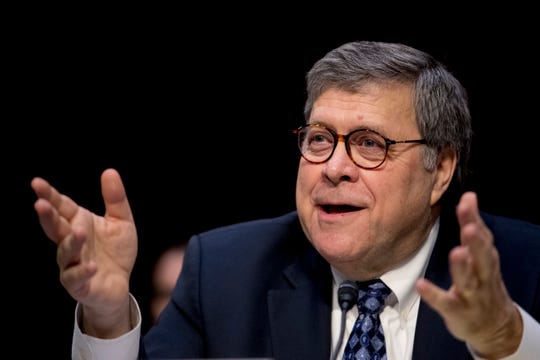 On the day of Attorney General Bill Barr's testimony in front of the Senate Judiciary Committee last week, there was, as always, a selective leak dropped into the fray.

With bated breath, we learned Special Counsel Robert Mueller had sent the attorney general a sternly worded letter grousing that Barr's four-page March 24 explanation of the core conclusions of the Mueller report "did not fully capture the context, nature, and substance" of the Mueller's "work and conclusions."

The customary histrionics followed. Posturing Democrats on the judicial committee gave long soliloquies on Barr's treacherous behavior. Sen. Mazie Hirono, D-Hawaii, accused the attorney general of abusing his office and lying to Congress, and many others demanded his resignation. The usual suspects called for impeachment.

Barr had apparently masterminded the most inept cover-up in history, first by accurately laying out the outcome of the special counsel's investigation. Then, after some light redactions (none instigated by the president), by releasing the report to the public so the entire world could read it.

Now, if a fresh observer to the Russia collusion circus only heard from Democrats, he might not know that the Mueller report had been public for weeks -- sifted through and debated extensively. He certainly wouldn't know that no criminality was uncovered. But most people heard something else. And Barr's greatest sin had been preempting the collusion spin for the first time.

In his initial letter, the attorney general informed the public, before media was able to manipulate and confuse the core findings, that, despite its best efforts, the special counsel -- an open-ended, unimpeded investigation with virtually no oversight -- couldn't find evidence to corroborate the prevailing myth that had been perpetuated for more than two years by Democrats and the political media.

By accurately conveying that the investigation had exonerated Trump and his administration of criminal conspiracy or coordination with the Russians, two years of ostensibly serious reporting was exposed as little more than resistance fan fiction.

Rather than take a moment's self-reflection about how their actions had caused unprecedented political chaos, undermined trust in the electoral system and crowded out legitimate coverage of the presidency, the entire collusion industry just moved its frenzied focus onto obstruction.

Well, under oath, the attorney general confirmed that he had spoken to Mueller on the phone and that the special counsel had been "very clear" that the AG's letter laying out the conclusions was not inaccurate. There's been no evidence to contradict his claim.

The AG's letter had also accurately conveyed that Mueller, who it seems spent a lot of his efforts ferreting out unseemly Trumpian outbursts rather than finding nefarious Russians, punted on charges of obstruction. Volume II of the Mueller report, on the issue of obstruction, reads like a political document meant to incite Democrats into doing what the investigation did not. And that is Barr's other sin: refusing to play Mueller's game.

According to the law, Mueller's job ended when he handed in his report to the attorney general. Yet Barr, who was under no legal obligation to release any of the findings, offered Mueller a chance to review his letter before sending it to Congress. Mueller reportedly declined, only offering his own summary after the Barr letter had been released.

Barr accepted the findings of the special counsel and made his legal judgment based on the evidence and arguments as outlined by Mueller. If Democrats disagree with his legal reasoning, they have a constitutional remedy called impeachment.

One thing Mueller didn't seem at all concerned about was whether the Trump-Russian collusion conspiracy had been initiated or stoked by Russians. Those clamoring for transparency when useful -- now acting as if investigating how the entire country was thrown into a panic over nonexistent Russian infiltration of the White House is absurd -- are the true conspiracy theorists.

Yet Barr, who dropped some interesting tidbits in the hearings, seems willing to investigate the impetus of the Russia "collusion" investigation, the role of the infamous dossier, and the Foreign Intelligence Surveillance Act warrants used by the previous administration for "spying." Now that Trump has been cleared of criminal conspiracy, it seems reasonable for the American people to have an understanding of how the Obama administration rationalized spying on its political rivals during a presidential election.

Perhaps it will be vindicated, or perhaps someone will find evidence of abuse of power.

Either way, in a healthy media environment, such a story would launch a massive investigatory effort. Today, it seems, the political media would rather engage in a concerted effort with Democrats to preemptively smear Barr.

David Harsanyi is a senior editor at The Federalist and the author of the book "First Freedom: A Ride Through America's Enduring History With the Gun."