"Drug companies already enjoy some of the highest profit margins in any industry — the last thing they need is a bailout."

Momentum has been building in Washington to take action on out-of-control prescription drug prices. One in four Americans cannot afford their medication, creating a full-fledged crisis that can no longer be ignored.

Lawmakers on both sides of the aisle vowed to hold Big Pharma accountable in the 116th Congress. Already this year, several hearings have taken place on Capitol Hill to address out-of-control drug prices — an optimistic sign that concrete action is beginning to take shape. 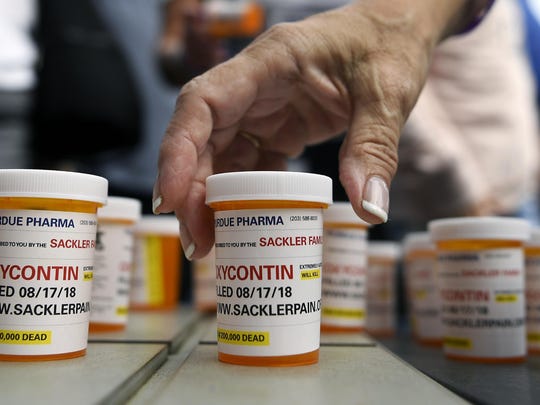 In this Aug. 17, 2018, file photo, family and friends who have lost loved ones to OxyContin and opioid overdoses leave pill bottles in protest outside the headquarters of Purdue Pharma, which is owned by the Sackler family, in Stamford, Conn. A new filing in a Massachusetts case ramps up the legal and financial pressure against the Sackler family, which owns the company that makes OxyContin. (Photo: Jessica Hill / AP)

The Trump administration pledged to lower prescription drug prices, too. The administration has made some laudable proposals and efforts. It aims to increase transparency in the drug market by forcing drug manufacturers to include a drug’s list price in their direct-to-consumer ads. The FDA, under outgoing Commissioner Scott Gottlieb, has worked to bolster competition and call out abuses in the marketplace by cracking down on anti-competitive tactics. These efforts are a step in the right direction to drive down the high cost of prescription drugs.

But now there is a proposal that takes a step backward in the fight to lower drug prices. It's called the “Rebate Rule,” and it would eliminate the ability of pharmacy benefit managers (PBMs) to negotiate rebates with drug makers for Medicare recipients — the only existing check in the supply chain on pharmaceutical manufacturers’ control over prices. The plan will cost patients and taxpayers billions of dollars, line the pockets of Big Pharma and could even exacerbate the crisis of rising drug prices.

In order to understand the detrimental impact of the Rebate Rule, one must understand the role of PBMs. PBMs negotiate with drug manufacturers on behalf of health insurance companies to get discounts on Medicare Part D drugs — drugs that our country’s most vulnerable patients rely on to survive. The savings PBMs negotiate benefit patients by helping insurers lower out-of-pocket costs.

But there are even greater consequences to the Rebate Rule. The proposed rule hurts American seniors and people with disabilities, particularly those living on fixed-incomes. According to the administration’s own analysts at the Centers for

Medicare and Medicaid Services (CMS), Medicare Part D premiums will increase by 25 percent overall and 19 percent in 2020 alone. This would be the biggest increase in history and would create a financial burden that seniors simply cannot bear.

American taxpayers also suffer under the Rebate Rule. The CMS analysis indicates that federal spending will increase $196 billion from 2020-29, making it the most expensive regulation in U.S. history.

Perhaps worst of all, the Rebate Rule hands drug companies a $100 billion bailout. Drug companies already enjoy some of the highest profit margins in any industry — the last thing they need is a bailout.

Drug companies attack PBMs and label them "middlemen," but drug companies only play the blame game because they stand to benefit in a world without rebates. If PBMs didn’t exist, drug companies would have nearly unilateral control over drug prices.

Every patient should be able to afford the medication they need to survive, but the Rebate Rule offers no certainty of lower prices — while guaranteeing premium hikes, irresponsible federal spending and more concentration of power with the drug companies. It’s time to hold them accountable for their price-gouging tactics. Our leaders in Washington need to turn its focus back to market-based solutions that increase price transparency and boost competition instead of ones that hurt our country’s most vulnerable citizens.