"Professional educators should be able to earn a salary that allows them to raise their own family and enjoy a middle class life." 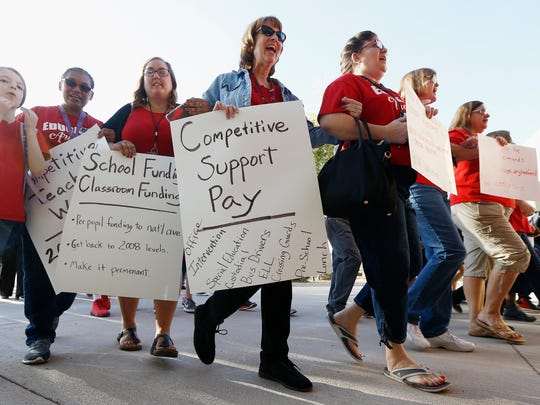 Professional educators should be able to earn a salary that allows them to raise their own family and enjoy a middle class life, Herbart writes. (Photo: Ross D. Franklin / AP)

For many, education is a calling — but that doesn’t mean a career in education should come with a vow of poverty.

That’s the case for too many educators who are struggling with low and declining pay, according to recently released national figures.

Studies have shown – and logic dictates – that the number one variable in student achievement is the presence of a high quality teacher.

But only 25 percent of educators would recommend a young person enter the profession, according to a statewide survey released by Launch Michigan earlier this year.

Respect for the profession is certainly a factor. As one survey respondent put it, “Teaching is a calling and a noble profession, but the constant criticism from media and politicians make us feel unappreciated, undervalued and disrespected.”

The Launch Michigan survey also showed pay and benefits weren’t far behind as a point of dissatisfaction. While teachers and education support professionals have weathered the attacks on their profession, many are driven out of education by stagnant and in some cases, declining pay.

While teacher pay has declined across the country, Michigan has been among the “leaders” in this trend. Adjusted for inflation, average teacher salaries in Michigan have fallen by 12 percent over the last decade, according to data from the NEA.

Only three states (Indiana, West Virginia and Wisconsin) have seen worse declines in teacher pay during that time.

How bad is it? In many districts across the state, there are teachers who qualify for Bridge cards and, in a few instances, Habitat for Humanity homes.

That statistic helps explain why one in five new teachers leave the profession within the first five years — an all-time high. Many young teachers are simply unable to pay off student loans and support themselves on such low salaries. The best and brightest in our colleges and universities are gravitating toward majors other than education. Between 2008 and 2016, Michigan colleges of education have seen a 66 percent decrease in enrollment — the lowest level on record.

The salary statistics also correlate with the well-documented underfunding of Michigan public schools. Last year, the School Finance Research Collaborative released a comprehensive study showing Michigan schools are underfunded by at least $2,000 per pupil each year. Other research from Michigan State University shows our state is last nationally in education funding increases over the past 25 years.

The “looming” teacher shortage is no longer looming. Districts across the state are reporting difficulties filling positions. The irony is, Michigan has a lot of teachers, they simply cannot afford to teach any longer. The startling disinvestment in our public schools has created a downward spiral in educator salaries and made it very difficult to attract and retain high quality professionals. This must end now.

Gov. Gretchen Whitmer’s education budget proposal would begin reinvestment in our classrooms, our students, our teachers and our support professionals. It is imperative everyone concerned with the plight of our public schools speak out in support of the governor’s education budget.

We entrust our children’s future to educators. We expect them to connect with our kids, discover their passions and unlock their potential. For those amazing gifts, professional educators should be able to earn a salary that allows them to raise their own family and enjoy a middle class life.