"The minimum wage should not keep workers in poverty, wherever they work." 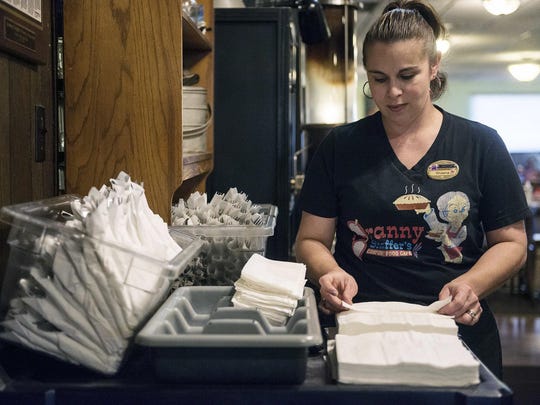 In this Tuesday, Dec. 18, 2018 photo, Shawna Green, waitress at Granny Shaffer's, prepares utensils for customers at the restaurant in Joplin, Mo. Wages will be increasing for millions of low-income workers across the U.S. as the new year ushers in new laws in numerous states. In Missouri and Arkansas, minimum wages are rising as a result of voter-approved ballot initiatives. (Photo: Roger Nomer / AP)

There are a lot of records that would be great to break. This isn’t one of them: June 16 marked the longest period in history without an increase since the federal minimum wage was established in 1938.

When the minimum wage does not go up, it goes down in value relative to the cost of living.

The buying power of today’s $7.25 minimum is lower than the minimum wage of 1968, which would be $11.96 in 2019 dollars, according to the U.S. Bureau of Labor Statistics Inflation Calculator. Our economy has grown considerably since 1968, but not the federal minimum wage, which sets the floor under worker pay.

When the minimum wage is too little to live on it’s bad for business as well as workers.

When the minimum wage goes up, worker financial stress and turnover go down, and businesses save on hiring and training costs. They see lower error rates, less product waste and better customer service.

State action is important, but it’s not sufficient. The minimum wage should not keep workers in poverty, wherever they work. We need a decent new federal floor, as called for in the Raise the Wage Act, which would gradually raise the federal minimum wage to $15 by the year 2024.

Nearly 40 million workers would get a raise if the minimum wage goes to $15 by 2024. The typical worker who would benefit is 35 years old — working jobs from preschool teacher to health care aide, cook to cashier to manufacturing worker.

Many business owners across the country support raising the minimum wage because they know it will be good for their business and their communities. They know it will help level the playing field.

Keeping the minimum wage low will not help small businesses compete with big businesses. Costco and Amazon already pay $15 minimum wages. Target is at $13 and going to $15 in 2020. Many smaller businesses pay at least $15 today, or are committed to getting there by 2024 or before.

Forward-thinking small business owners know that to survive and thrive amid big chains and online giants, you need employees who want to work for you and customers who want to buy from you.

You have to give customers a reason to come through your doors and keep coming back. And that comes back to customer service, which comes back to employees.

Gradually increasing the minimum wage will enable lower-wage companies to adjust to raises over time, experiencing benefits such as lower turnover, better productivity and increased consumer spending as they do.

Holly Sklar is the CEO of Business for a Fair Minimum Wage, a national network of business owners and executives who believe a fair minimum wage makes good business sense.