'If you believe any of this is morally equivalent to carting away millions of people to crematoriums for execution because of their faith, your moral compass is irreparably broken.'

"The United States is running concentration camps on our southern border, and that is what they are."  — Rep. Alexandria Ocasio-Cortez. 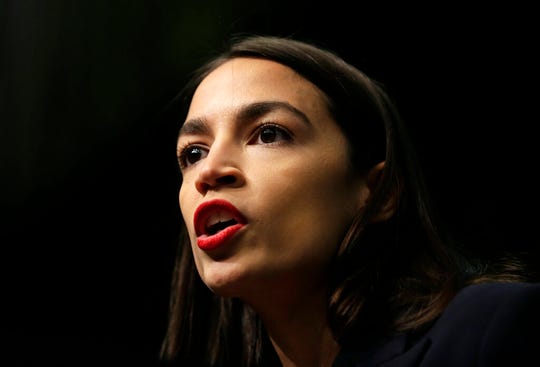 In this April 5 2019, file photo, Rep. Alexandria Ocasio-Cortez, D-N.Y., speaks during the National Action Network Convention in New York. A minor league baseball team in California has apologized to Ocasio-Cortez for a Memorial Day tribute video that lumped her image with those of Kim Jong Un and Fidel Castro. (Photo: Seth Wenig, AP)

In April 1944, two Slovakian Jews named Alfred Wetzler and Rudolf Vrba escaped from Auschwitz and provided two of the first eyewitness accounts of the horrors of the European concentration camps. Both men had been rounded up with a group of their countrymen and sent to the Birkenau section of the camp in the spring of 1941, where they were immediately put to work as slave labor.

This was before the German regime had properly streamlined and industrialized efforts to destroy European Jewry. In the early days of the camp, any man incapable of labor was immediately executed. Those who survived were sent to do the grueling work of construction.

The men began their work at sunrise, and except for a half-hour break at noon, when the prisoners were fed cabbage and turnip soup, they worked until 6 p.m. For dinner, the men were given an ounce of moldy bread made from "ersatz flour and sawdust." Lice and fleas tortured their emaciated bodies as they slept on wooden boards. "Rats were so bold they gnawed at the toes and fingers of sleepers and stole the crumbs they had left in their pockets," wrote Robert Conot in his book "Justice at Nuremberg."

A third of the prisoners died every week. If a worker was hurt, he was allotted three days of recovery time. If they failed to heal, those working in the infirmary — where Dr. Josef Mengele had already begun his nefarious work on women and children — would inject a fatal dose of phenol directly into their hearts.

Of the 2,722 Slovakian Jews who had been rounded up with Wetzler and Vrba, only 159 survived to the summer of 1942. Those who died had been dumped, with another approximately 105,000 bodies, into shallow trenches around Birkenau. "As they decomposed," Conot noted, "the earth rose like a yeasty mixture of dough and bubbled up nauseating gases, which spread for miles."

I think of that last sentence whenever some modern-day know-nothing begins comparing the United States to a proto-Nazi state. Maybe it's because their analogies are embarrassingly ignorant and intellectually lazy, or maybe it's because people like Ocasio-Cortez, perhaps unknowingly, diminish the suffering of millions of dead. Or maybe it's because my own grandfather was taken as slave labor in Austria.

Then again, maybe it's because the comparison itself is a despicable smear of the American people. It's true that we're not prepared for the crush of refugees on the southern border. While there is a border, however, we ask migrants who show up to follow existing laws, ones that are subject to the democratic process and the court system.

Sometimes we reacted ham-fistedly, even temporarily breaking up families who are transporting children without any oversight. Some migrants have been abused, and some have died in our care. There is no excuse for it. Neither is sanctioned by the state.

If you believe any of this is morally equivalent to carting away millions of people to crematoriums for execution because of their faith, your moral compass is irreparably broken.

This doesn't mean that people of good faith can never be critical of U.S. policy or contrast any policy with those of Nazi Germany. "Concentration camps" have a long history that predates the Holocaust, after all. But the contemporary usage is clear, notwithstanding Ocasio-Cortez's unconvincing attempts to walk back her initial statements. She, in fact, stresses: "I don't use those words lightly. I don't use those words to just throw bombs."

This dumb Nazi equivalence certainly isn't new. We see a spike whenever a Republican is elected -- be it Barry Goldwater, Ronald Reagan or George Bush. Of course, with Donald Trump, they are in full bloom. We see it all across social media — not only from random accounts but from celebrities, well-known pundits and major newspapers peddling fourth-grade-level historical analysis. What they're doing is cheapening their own arguments, on top of all else.

Ocasio-Cortez, whose historical obliviousness leads her to believe we're living in an economic and racial dystopia, says she is speaking to those who "are concerned enough with humanity to say that 'Never Again' means something and ... that concentration camps are now an institutionalized practice in the 'home of the free.'" It's indeed strange to hear a leftist who champions anti-Israel causes and anti-Semitic politicians using this phrase, as the Jewish state is the most successful and enduring manifestation of "Never Again." The appearance of "Never Again" also undermines her later contention that she wasn't talking about the Nazi camps.

We're forced to take Ocasio-Cortez seriously because she is both a charismatic elected official with many impressionable fans and a person bestowed with a huge media platform. Only last weekend, she appeared on "Meet the Press" praising socialism — the other scourge of the 20th century. Yet, when we need our media to ask Ocasio-Cortez to explain her profoundly childish and destructive statements, they are nowhere to be found.

David Harsanyi is a senior editor at the Federalist.