Opinion: Don’t claim to be inclusive of ‘everyone’ if you don’t want Trump supporters

Our society is sharply polarized for a bunch of reasons, but one that sticks out in my mind is the prevailing sense of righteousness.

Opinion: Don’t claim to be inclusive of ‘everyone’ if you don’t want Trump supporters 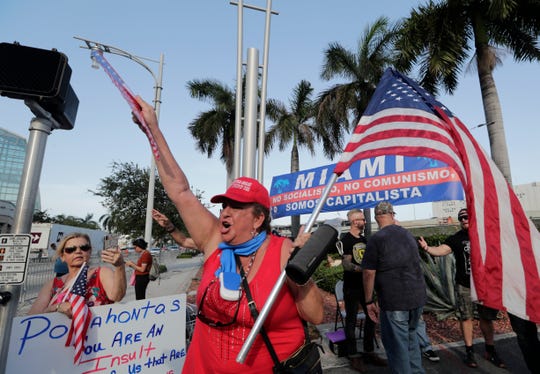 Our society is sharply polarized for a bunch of reasons, but one that sticks out in my mind is the prevailing sense of righteousness. You see it all the time in online debates — the other side isn’t just mistaken, it’s deficient, or venal, or immoral, or even evil.

Exhibit A is the new policy announced this week by Ravelry, which appears to be the top site for craftsy people who like to make things with yarn. Ravelry users upload patterns and projects, then share them with other users.

On Sunday, Ravelry said it was banning all content (projects, patterns and comments) that supported President Donald Trump and his administration. The statement included this remarkable bit of pretzel logic: “We cannot provide a space that is inclusive of all and also allow support for open white supremacy. Support of the Trump administration is undeniably support for white supremacy.”

Honestly, I don’t know why people even aspire to be “inclusive of all,” because “all” means everyone, including folks no one wants to run into at the punch bowl — serial killers, necrophiliacs, telemarketers, your aunt’s creepy ex-husband, the list goes on and on.

But I digress. Ravelry’s founders (who have been publicly mum since Sunday) tried to distinguish in their announcement between Trump supporters and Trump support. The former remains welcome, the latter does not, ostensibly because it makes the site feel like a hostile environment to some users.

Don’t get me wrong — I’m not defending Trump. What bothers me is the way Ravelry’s founders imputed all of his sins on everyone who might consider Trump a better choice next year than, say, Bernie Sanders.

Trump’s signature issue may well be the real and metaphorical border wall — his battle to stop people from crossing the southern border legally in search of asylum, or illegally in search of a better life here. Critics certainly see Trump’s xenophobia as a manifestation of white supremacy. To his allies on that issue, however, it’s not about race, it’s about an influx of people who will be a drag on the economy, public schools and the healthcare system.

Those supposedly dire consequences are debatable; even some Republicans with a traditional view of trade and economics see immigration as a net boon, not a burden. But those same Republicans would rather have the country led by an anti-migrant conservative who will cut tax rates and regulations than a migrant-friendly Democrat eager to bury the country in taxes and red tape.

With two parties exerting a stranglehold on elected offices, We the People don’t have the luxury of supporting leaders who share every one of our core beliefs. We all have to hold our noses to some degree — and Republicans more than Democrats these days. The president who embraced trickle-down economics and gave them two conservative Supreme Court justices is also the guy detaining migrant children in deplorable conditions, trying to speed global warming and threatening the economy with a trade war (which some Democrats are cheering on).

That’s not to say every president is equally flawed (ahem, Richard Nixon) or that some Trump supporters aren’t white supremacists — some clearly are. But again, one brush does not paint them all.

Few people would have complained had the founders of Ravelry — a rich source of pink pussyhat designs — banned all partisan flexing during the protracted campaign season. But instead, they decided to bar content that was offensive to them, implicitly endorsing content that’s offensive just to other people.

It’s their site, they can do as they wish. But ham-handed moves like this only encourage those who want Congress to require online platforms to be neutral in order to be shielded from liability for their users’ posts. That would be a big step backward for the internet, not just for Ravelry and the knitters whose sensibilities it is so eager to protect.

Jon Healey is the deputy editorial page editor for the Los Angeles Times.