"A vote for President Trump is a vote for economic prosperity."

This summer, President Trump is planning campaign rallies across America's industrial heartland in an effort to consolidate support among millions of Trump voters, and  Michigan is right at the top of the list.

It was no surprise when Trump won Michigan in 2016 by roughly 10,000 votes. The hard-working Michiganians were the “forgotten Americans” to whom President Trump dedicated his campaign from the beginning. Democratic and Republican presidents alike had spent decades pandering to foreign trade partners in China, Mexico, and the European Union — all at the expense of Michigan manufacturers. The workers who depend on these lost manufacturing jobs saw in Trump a presidential candidate who could finally reverse their fortunes. 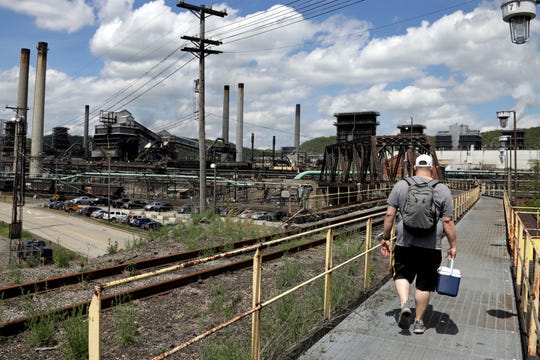 Workers who depend on manufacturing jobs saw in Trump a presidential candidate who could finally reverse their fortunes. (Photo: Gene J. Puskar, AP)

In 2009, Michigan’s unemployment rate peaked at 14.6 percent. Employers were hemorrhaging jobs, and millions of employees were left to fend for themselves.

One decade later, the state’s unemployment rate has dropped to roughly 4 percent, and many of those workers have been blessed with good-paying career opportunities. In fact, Michigan is currently experiencing the most significant job creation streak since World War II. Under President Trump, joblessness in Michigan has reached its lowest level of the century.

Such positive momentum is difficult to ignore. Just ask the left: In February, even Detroit Mayor Mike Duggan — a Democrat — praised the way Michigan is “fight[ing] unemployment and poverty.”

The mayor has Republican policies to thank. President Trump understands that corporate tax cuts reward job creators and those who depend on them — employees and job-seekers. Only in a less-regulated, business-friendly environment can job creators confidently invest in their companies and grow the U.S. economy. When the federal government interferes with business activity, it interferes with economic prosperity.

Due to the Tax Cuts and Jobs Act — signed by President Trump in 2017 — dozens of Michigan employers now have more money to spend on business expansion and job creation. Because of lower tax rates and increased deductions, companies are rewarding workers with higher salaries, increased 401(k) contributions, and generous bonuses.

Now, it’s time for Michigan voters to step up one more time and vote again for President Trump in 2020. My organization, the Committee to Defend the President, has dedicated $1 million to traverse Michigan, in hope of registering new Trump supporters and getting them out to vote in 2020.

From Detroit to Midland and beyond, we will mobilize a pro-Trump army. The message is simple: Help us fight for the president who has been fighting for you.

Ted Harvey is chairman of the Committee to Defend the President.