Opinion: Truman is one of society's "most remarkable"

"The re-evaluation of the presidency of Harry Truman, who left office with history’s lowest approval ratings, has been going on for years..."

Opinion: Truman is one of society's "most remarkable"

FILE -- Former President Bill Clinton speaks after receiving the Harry S. Truman Public Service Award during a ceremony at the Truman Presidential Museum & Library Wednesday, May 6, 2009, in Independence, Mo. The award is given out annually by the city of Independence and Clinton was honored for his work during and after his presidency. (Photo: ED ZURGA, AP)

A lot of people, it turns out. In fact, the 33rd president is so popular today that the curators and archivists of the Truman Presidential Library and Museum need more space. The library and museum is closing next week for renovations that will take a year.

The re-evaluation of the presidency of Harry Truman, who left office with history’s lowest approval ratings, has been going on for years and has accelerated recently.

Truman was an accident of history, but in retrospect if not in real time, a happy accident. He ascended to the White House after the death of wartime President Franklin Delano Roosevelt. Americans asked a disturbing question at FDR’s death: Can he swing this job? Truman himself wasn’t sure. On April 13, 1945, a day after Roosevelt’s death, the new president beseeched the capital press:

"Boys, if you ever pray, pray for me now. I don’t know whether you fellows ever had a load of hay fall on you, but when they told me yesterday what had happened, I felt like the stars and all the planets fell on me."

He wasn’t the only one who felt that way. The last president without a college degree, a political figure tied to a primitive but powerful local machine, Truman was a former senator whose vice presidency was perhaps the most isolated of the 20th century. He and the president had conferred only a handful of times. He was unaware of the Manhattan Project that at that moment was developing the atomic bomb, and it wasn’t until a dozen days into his presidency that Secretary of State Henry L. Stimson gave him a comprehensive briefing on the weapon whose use would define his presidency and forever transform global politics.

But there was unseen depth to Truman, and he possessed an unusual but indispensable preparation for the task, in part here in the Kansas City area and in part during World War I.

"In the Great War, the civilian Harry Truman, the bank clerk and future haberdasher, proved himself a leader, was promoted, was commended, went overseas, was shot at, and held command of a body of men under fire," the late University of Virginia historian William Lee Miller wrote in 2012.

The big Truman-reputation breakthrough came in 1992, with the publication of David McCullough’s blockbuster biography, winner of the Pulitzer Prize. McCullough celebrated in Truman what he described as ‘’his inner iron, his bedrock faith in the democratic process, his trust in the American people, and his belief that history was the final, all-important judge of performance.’’

"I feel very strongly in giving credit where credit is due," McCullough said in an interview, "particularly when credit is long overdue."

The renovation of the Truman library is, likewise, long overdue. 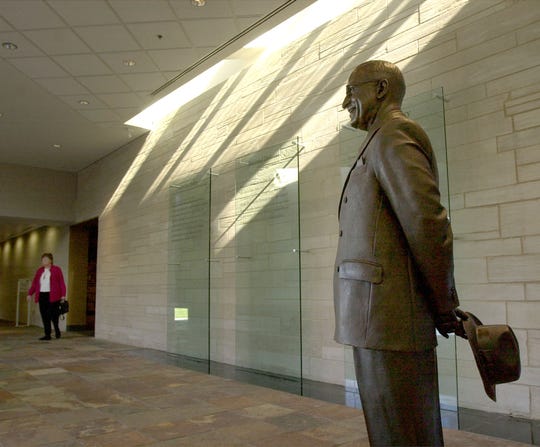 FILE -- A visitor enters a contemplation area containing a life-sized statue of Harry S. Truman, Dec. 19, 2001, at the Truman Presidential Museum and Library in Independence, Mo. The display is part of a 11,000-square foot exhibit recently opened as part of a $22.5 million renovation. (Photo: CHARLIE RIEDEL, ASSOCIATED PRESS)

Above all, it will redeem what Sen. Adlai E. Stevenson III of Illinois said was the lesson of Truman’s life, which he described as "an object lesson in the vitality of popular government; an example of the ability of this society to yield up, from the most remarkable origins, the most remarkable men."

When the library reopens, the country will be in the throes of its next presidential election — what Truman characterized as "a great event in the life of a free people [that] gives them a chance to decide their own national destiny."

Truman, his presidency and the 1948 election that the Chicago Tribune misreported in its famous DEWEY DEFEATS TRUMAN headline were themselves a riddle. But Truman and the American people answered that riddle, with aplomb and with a sense of national purpose.

David Shribman is former executive editor of the Pittsburgh Post-Gazette.