Finley: Brooks lived by his own rules

Among the many words that described Patterson, irreverent and unrepentant are near the top. He said what he thought, damn the consequences

Finley: Brooks lived by his own rules

Brooks Patterson was calling from a golf course in early summer of 2004. He’d just completed six months probation for driving erratically, a sentence which included a ban on drinking.

Among the many words that described Brooks Patterson, who died Saturday at age 80 of pancreatic cancer, irreverent and unrepentant are near the top of the list. He said what he thought, damn the consequences. 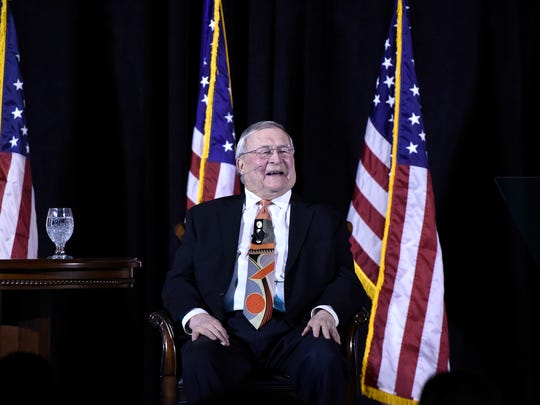 Oakland County Executive L. Brooks Patterson laughs with the audience at a joke during the annual State of the County address on Feb. 8, 2017 at the Auburn Hills Marriott Pontiac in Pontiac. (Photo: Jose Juarez, Special to Detroit News)

That’s one reason he evoked such a visceral reaction. You either loved Brooks or you hated him. I was in the love him camp, considering him one of the few genuine people I’ve known in politics. He didn’t pretend to be something other than who he was, and who he was was a flat-out character.

He had a razor wit that fueled an endless stream of one-liners, most of which fell in the red zone on the politically correct scale.

Brooks simply couldn’t hold in a funny thought. If it came into his head, it had to come out of his mouth, often to his detriment.

The outrage his remarks generated unfortunately masked an irrefutable truth about Brooks: He was a brilliant politician, perhaps the best executive Michigan has ever seen.

Assembling crackerjack teams was his forte, and resulted in Oakland County becoming a national leader in good local government.

He didn’t apologize for putting Oakland County first, despite relentless accusations of Detroit bashing. Brooks’ theory: If he could help Detroit without hurting Oakland, he would. But he wouldn’t sacrifice the interests of his taxpayers to boost Detroit’s.

Because of his suspicion of regional initiatives, and some ill-considered comments, he was branded by many as a racist. Brooks didn’t hate the city. He hated wasteful government, and he saw too much of that in Detroit.

No one talks much about Brooks’ heart. But it was huge. After his son and namesake died in a snowmobile accident in 2007, Brooks began the Brooksie Way half-marathon to raise money for Oakland County charities. He also founded Rainbow Connection to fulfill the wishes of chronically sick children.

He kept his private life close, so few saw that side of him. But when he called me to come see him after his devastating 2012 auto accident, he spent our hour together talking about how the tragedy refocused him on his family, and little else.

Brooks never really recovered from the accident, remaining in a wheelchair. But it didn’t slow his mind. He was always crafting new schemes for making government work better.

When cancer struck, he wanted to write columns for The Detroit News chronicling a battle he expected to last longer than it did. In his first piece, his description of his chemotherapy treatment perfectly sums up his outlook on life:

“You put poison into your system, your hair falls out, you paralyze yourself for a minimum of five days, and then the “witch” doctor says you can’t have any alcohol. Who says cancer is not a tough disease?”

He was Brooks, right to the end.