"What's happening right now damages not only to the image of the organization, but also its members..."

The sweeping federal corruption probe into the financial stewardship of the United Auto Workers is more than just nabbing a few bad guys who refused to play by the rules. It is more than netting plea deals from greedy officials whom the UAW publicly scorns as unscrupulous after they’ve been exposed by the feds.

It is about ending the culture of corruption that has been going on at the highest levels of the union powerhouse for far too long.

If the feds can use RICO (Racketeer Influenced and Corrupt Organizations Act) to credibly establish that there is a criminal enterprise inside the behemoth organization run by a union oligarchy, it might be time to put the UAW into court receivership until it can function with financial integrity for the benefit of its members.

What's happening right now damages not only the image of the organization, but also its members who have entrusted their leaders to operate with the highest integrity.

Every other day we are greeted with headlines about the corruption of a union that largely made its mark for calling out financial mismanagement in government and in corporations.

The UAW preaches transparency, fiscal integrity and the need to reduce corruption in government when it rolls out its slate of candidates running for various offices. Now the UAW has to look in the mirror and ask the question: Are our own hands clean?

Not according to what the feds have uncovered.

In fact, the corruption investigation reached a crescendo last week when federal agents raided the Canton Township home of the current UAW President Gary Jones as well as the California home of its former leader Dennis Williams and several other locations. 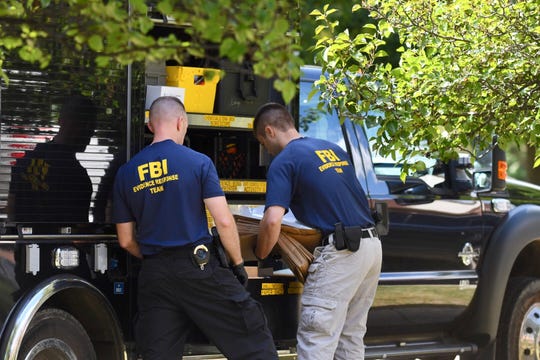 FBI agents load material collected from the home of UAW President Gary Jones during a search of his Canton home. (Photo: Max Ortiz, The Detroit News )

While none of them have been accused of any wrongdoing, the raids at their houses signal the feds are nowhere near the end of their investigation.

If the UAW ends in a receivership, it won’t be the first union to do so. Courts have dealt with corrupt unions in the past. An analysis published by the University of Pennsylvania Law Review sought to explain why receivership sometimes makes sense, citing a 1986 case brought against Local 30/30B of the Roofers Union in Philadelphia.

“In this case, the court convicted thirteen union officers of 152 counts of racketeering, RICO conspiracy, and other predicate criminal acts. The union officers committed these acts in order to embezzle from the union's pre-paid legal services plan, bribe various public officials, including municipal and state judges, extort payments from contractors, make collections for organized crime and defraud an insurance company through the mail,” reads a Law Review article.

Expect the UAW and their allies to kick and scream about the dangers of receivership and perhaps launch public rallies against any possible judicial imposition of a trustee to oversee its affairs in the interim.

The irony is that UAW members ought to be rallying and crying out against the reports of misconduct of one of its former senior officers, Michael Grimes, the latest alleged culprit in the widening probe who has been charged with wire fraud and money laundering.

Grimes, who was an assistant to UAW Vice President Cindy Estrada, is accused by the government of receiving $1.99 million in kickbacks from union vendors.

Right now UAW members should be demanding answers to the alleged lawbreaking, dishonest dealings and the double dealing.

If members of the UAW don’t demand an end to the misconduct that is being alleged, perhaps court receivership will wipe the union's slate clean.

“Despite its unattractiveness and its dangers, however, a receiver, or other similarly intrusive remedy, is the only solution to corrupt unions. Because of the potential dangers, the courts must take care to impose such a remedy sparingly and only after the prosecution has met the highest standard of proof. Receivers must only be used to correct a serious wrong, not to wage an undeclared war on the labor movement,” a Penn Law Review article noted.