"I do not see how a game that gives women a head start supports or encourages either women or men. Instead, it just embeds inequity and incites resentment." 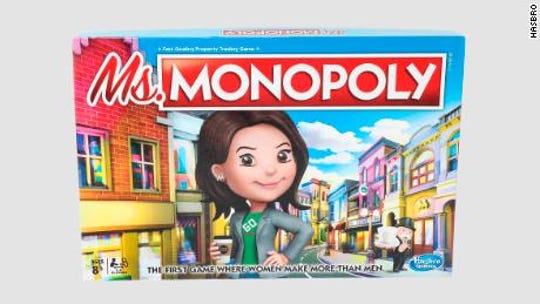 I have three girls and three boys. Some of them have recently gotten into Monopoly, the classic board game.

But my kids won’t be playing Hasbro’s new version, “Ms. Monopoly,” which gives women 20% more than men when they pass Go.

As an economist, I love classic Monopoly and its real-world financial lessons.

As a person, I like the message conveyed by the new Ms. Monopoly cover — that young, hip women can be as successful, if not more, than old white men in stuffy suits and top hats.

The problem is what’s inside the box.

Ms. Monopoly’s unequal rules not only distort real-world realities, they also would surely incite conflict between my boys and girls.

Don’t get me wrong. I’m a woman. I have three sisters. I have three daughters. I fully embrace the contributions women make to society and their families, and I celebrate the substantial gains and accomplishments women have made in education, earnings and career advancements over the last half-century.

But I do not see how a game that gives women an edge supports or encourages either women or men. Instead, it just embeds inequity and incites resentment.

If my children played this game, I’m sure my girls would be thrilled — at first — over the advantages it offers. No doubt they’d gloat as they passed go and pocketed 20 percent more than their brothers. And I’m equally sure these things would upset my boys, leading them to retaliate with verbal jabs at their sisters.

If one of the girls won, the boys would give her no credit, claiming it was only because the rules of the game were unfair. And if one of the boys won … Wow. I can hear the disparagements now, about how girls must be really lame if they can’t win even with a huge advantage.

Either way, the girls wouldn’t come out feeling good about themselves, and the boys would be either angry and resentful or prideful.

The same thing happens when organizations and politicians tell women they get paid less than men for performing the exact same job and attempt to legislate equal paychecks across genders.

Harder-to-measure factors such as differences in workplace flexibility and benefits likely account for some of the remaining gap.

Women tend to value flexibility more than men do, but that quality-of-life advantage would be the first to go if Congress attempts to close the so-called gender pay gap through legislation such as the Paycheck Fairness Act.

Women already have both the law and free markets on their side. Equal pay for equal work has been the law of the land for more than five decades, and the free market penalizes employers who discriminate against women by putting them at a disadvantage against competitors who don’t discriminate.

Women don’t need politicians to paint them as victims and then step in and save the day. They can stand on their own accomplishments when it comes to being paid for what they produce.

That’s not a message I want my girls or boys to embrace. Instead, I want them to believe that they are equally capable of achieving what they set their minds to. And I want the paychecks they receive to reflect the choices they make, the effort they put forth, and the results they achieve as opposed to the value that some government official or stacked game deck assigns to them.

Rachel Greszler is a research fellow in economics, budget and entitlements for The Heritage Foundation.