"We love the Great Lakes, we support Michigan jobs, and we rely on the energy the tunnel will deliver to power our communities and heat our homes." 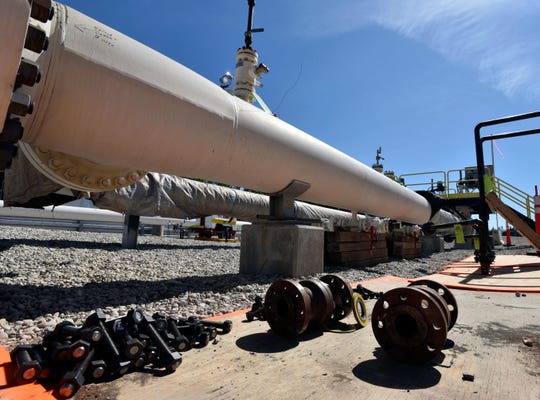 Fresh nuts, bolts and fittings are ready to be added to the east leg of the Line 5 pipeline near St. Ignace on June 8, 2017. (Photo: The Detroit News)

Late last year the Legislature approved — and the governor signed — a plan to move the Line 5 oil and gas pipeline out of the water in the Straits of Mackinac and to put it safely in a tunnel buried 100 feet below the lake bed. Now, a few in Lansing are attempting to stop construction.

The underground concrete tunnel would provide multiple layers of protection to safeguard the Straits from the risk of an oil spill, while leaving the lake bed, fish and wildlife undisturbed.

Up north, we’re conservationists. We cherish the water and our local environments. We’re also hard workers, providing for our families, putting food on their tables and keeping our homes and work sites warm each winter.

We agree that the Great Lakes tunnel just makes sense.

Two-thirds of the counties in the Upper Peninsula have already passed resolutions in support of the Great Lakes tunnel. They’ve been joined by lakeshore counties south of the bridge, including Grand Traverse County — that’s Traverse City — and Cheboygan County. Democratic and Republican counties support the tunnel.

Mackinac County has passed a pro-tunnel resolution. So has Menominee. And Marquette. So has Delta and Dickinson and Houghton and Iron and Gogebic and Ontonagon and Baraga.

Cities from Norway to Negaunee, townships from Ford River to Franklin, and more have also joined the pro-tunnel chorus. The Great Lakes tunnel matters to all of us.

The answers are simple — across our entire state, we love the Great Lakes, we support Michigan jobs, and we rely on the energy the tunnel will deliver to power our communities and heat our homes.

On the flip side, closing Line 5 would devastate Michigan’s statewide economy. The move would impact more than 47,000 direct and indirect jobs from the tip of the Keweenaw Peninsula to Monroe. Hundreds of millions in investment would disappear.

It would create cripplingly higher costs and disastrous supply shortages for propane, the fuel our families use to heat their homes during Michigan’s brutal winters. Remember, Michigan in 2017 used 489 million gallons of propane, and 75% of it was used residentially. Michigan is the number one state in the nation when it comes to residential propane use — most of it in the lower peninsula — and shutting down the pipeline instead of building the tunnel would turn off 55% of residents’ supply. That’s a chilling thought, as fall turns to winter.

Without the tunnel project, our local communities would also lose tens of millions in local tax revenue. The pipeline it will house generates property taxes, sales and use taxes, and income taxes. That means investment we rely on for our local schools, our local roads, and our local services. In fact, in many communities, it’s the single largest taxpayer.

Preventing a clean-water infrastructure project at the expense of millions in local investment would be particularly cruel at a time when Lansing is already debating budget cuts and reduced programs on which all Michigan residents rely.