Opinion: No, Israel does not target Palestinian children

Several prominent figures would certainly like the public to think so.

Opinion: No, Israel does not target Palestinian children

Does Israel intentionally target Palestinian children, including during its most recent operation in Gaza? Several prominent figures would certainly like the public to think so.

For example, the recent flareup in the region compelled best-selling author Shailja Patel to tweet: “I'm talking about Israel incarcerating over a million Palestinian children in the world’s largest concentration camp, Gaza, steadily poisoning them, and testing weapons on them.”

Meanwhile, the website of Rep. Betty McCollum of Minnesota states that “Israel’s system of military juvenile detention is state-sponsored child abuse designed to intimidate and terrorize,” echoing similar language from a bill she introduced in April, currently with 22 co-sponsors.

It’s true that Israel’s control of the West Bank and frequent conflicts with Gaza have resulted in the detention of — and occasional use of armed force against — Palestinian youth. But stating or implying that Israelis intentionally target Palestinian children goes well beyond a display of genuine care for children and crosses a clear line into antisemitism. 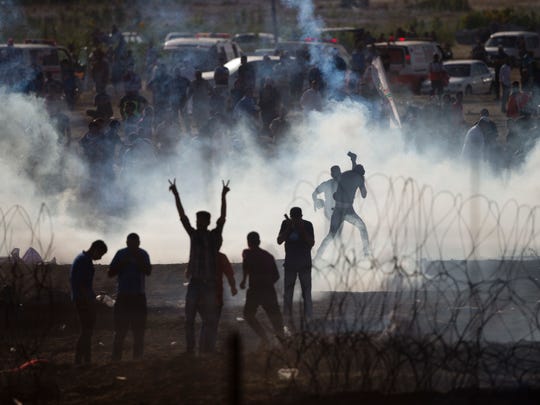 First, blaming incidents of child casualties exclusively on Israel requires a willful blindness to culpability on the Palestinian side.

In Gaza, Hamas indoctrinates, arms and orders adolescents to conduct terrorist operations. It uses children to either deter or raise the stakes of Israeli retaliation by launching rockets into Israel from homes and schools. And it commands its people to remain in areas where Israel has clearly warned of an impending offensive.

Things are no better with the Palestinian Authority, which offers monthly salaries to the families of terrorists killed or imprisoned by Israel, and encourages children to become “martyrs.” Even the U.S. House of Representatives acknowledged these dangerous tactics, last year passing legislation that sanctions Hamas for “violating universally applicable international laws of armed conflict by intentionally using civilians and civilian property to shield military objectives from lawful attack.” 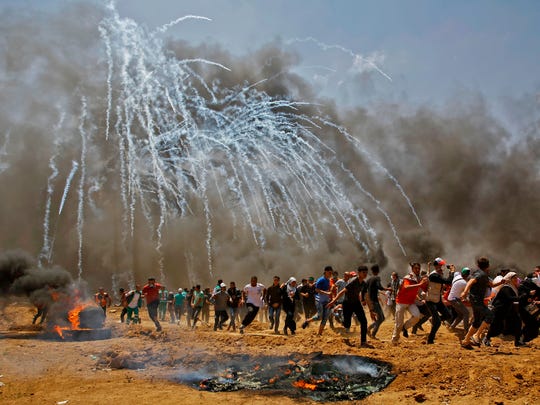 Palestinians run for cover from tear gas during clashes with Israeli security forces near the border between Israel and the Gaza Strip, east of Jabalia on May 14, 2018, as Palestinians protest over the inauguration of the US embassy following its controversial move to Jerusalem. (Photo: MOHAMMED ABED, AFP/Getty Images)

In July, the United Nations released its annual report titled Children in Armed Conflict of 2018, which found last year to be the worst on record for children in conflict.

In Afghanistan, the child death toll was 3,062. In neighboring Syria, 1,854 children were killed. In Yemen, close to 1,700. Meanwhile, the same report showed that Israeli forces were responsible for the deaths of 56 Palestinian children, 51 of whom died in Gaza during the same violent demonstrations for which Hamas canceled school so students could be present when the strike occurred.

The third way we know that accusing Israel of targeting Palestinian children crosses the line into antisemitism is the way in which, despite overwhelming evidence to the contrary, it paints Israel as an evil entity that either specifically targets children, or doesn’t care if children get targeted.

Bernie Sanders’ surrogate Linda Sarsour tweeted as much recently when she said Israel has “stripped the Palestinians of their humanity to justify the indiscriminate killings including of children. Half of the population of Gaza ARE CHILDREN.”

In reality, Israel’s military goes to unprecedented levels to reduce casualties. The Israel Defense Forces emphasizes “purity of arms” and consistently works to avoid harm by distributing flyers and sending text messages to Gazans alerting them of impending airstrikes, even using non-explosive “roof-knocking” projectiles to warn residents who may not have vacated the area.

Col. Richard Kemp, national security expert and former commander of the British forces in Afghanistan, has spoken at great length to this very point. So has former U.S. chairman of the joint chiefs of staff Gen. Martin Dempsey, who praised Israel’s measures to reduce civilian casualties. In the latest round of violence, these measures explain why adult males (considered by Israel to be combatants) constituted the vast majority of casualties.

So if accusations made by Patel, McCollum, Tlaib and others are so far from the truth, one has to wonder why they continue pushing this narrative. The simple answer is that such claims are modern incarnations of centuries-old blood libels, antisemitic slander that falsely accused Jews of killing Christian children to use their blood in religious rituals. Circulating throughout Europe during the Middle Ages, this formed the basis for countless anti-Jewish pogroms.

Proportionately critiquing Israel’s military actions in the interest of reducing civilian casualties and the detention of Palestinian children is completely legitimate, if not encouraged.

Israel should — and I expect will — continue to take great measures to minimize collateral damage. However, to suggest that Israel purposefully and maliciously targets innocent children is plainly antisemitic. When espoused by elected officials no less, it impedes any genuine debate about how to reduce child suffering during conflict.

Ido Levy is editor-at-large of the J’accuse Coalition for Justice. He wrote this for InsideSources.com.