Opinion: Is impeachment backfiring on the Democrats?

"Democrats haven't gotten any closer to convincing a single Senate Republican to remove the president."

Opinion: Is impeachment backfiring on the Democrats? 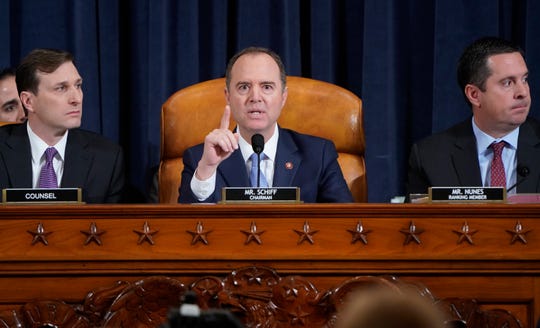 Impeachment is a political process. No sentient being, after all, believes that Adam Schiff, chair of the the House Intelligence Committee, or House Speaker Nancy Pelosi are good-faith guardians of constitutional order. And judging the process strictly on political grounds, it hasn’t been a success for Democrats.

For one thing, impeachment, if it happens, will effectively end up being a partisan censure of President Donald Trump. Democrats haven't gotten any closer to convincing a single Senate Republican to remove the president. Certainly not Senate Majority Leader Mitch McConnell, who says there will be a quick trial. Not even Utah Sen. Mitt Romney, who, at this point, is aptly troubled but uncommitted.

It’s highly probable that a Senate trial run by Republicans, with new witnesses and evidence, would further corrode the Democrats’ case. Liberals, of course, will pretend that Senate Republicans are members of a reactionary Trump cult, putting party above country, but if there had been incontrovertible proof of “bribery,” a number of them would be compelled to act differently. No such evidence was provided. Adding an obstruction article, based on the Mueller Report, would only make the proceedings even more intractably partisan. Yet, the recent push to force former White House counsel Don McGahn to testify suggests Democrats could be headed in that direction.

In any case, what we can look forward to in a Senate trial is more Ukrainian drama. Far from weakening Trump in 2020, the story might end up dragging Joe Biden into a defensive posture. Journalists perfunctorily refer to anything related to Ukrainians or the Bidens as a “conspiracy theory,” but it’s clear that Hunter Biden was cashing in on his father’s influence, and it's still unclear what Joe Biden did about it. Republicans have already requested transcripts of conversations between Biden and then-Ukrainian president Petro Poroshenko over the vice president's requests to fire Viktor Shokin. It’s going to become a difficult story to ignore.

So what is the upside? At first, Democrats claimed that polls were irrelevant because impeachment was a moral and patriotic imperative. Once national support spiked, numbers suddenly mattered very much, and the usual suspects couldn’t stop talking about them. What most polls now confirm is that while Americans were paying attention to the breathless media coverage, public support for the inquiry is at best stagnant and probably declining.

The FiveThirtyEight average for support among independents topped out at 47.7% in late October. It sank to 41% during the hearings. A recent Politico/Morning Consult poll found that voter opposition to the impeachment inquiry is at its highest point since it started asking the question: “Today, 47% of independents oppose the impeachment inquiry, compared to 37% who said the same one week ago.” Put another way, more people — not just independents, but everyone — viewed the construction of Trump’s wall on the Mexican border as a higher priority than impeaching Trump.

Even the best poll for impeachers, one conducted by CNN, saw no change during the dramatic hearings. The Morning Consult poll “didn’t do much to move the needle,” and still finds support below where it was before the hearings. Will support for impeachment miraculously surge upward in places such as Wisconsin as the election approaches? It seems unlikely.

In a deep dive into recent polls for Vanity Fair, Ken Stern summarizes the perspective of independents: “Impeachment reflects the agenda of the political establishment and the media,” and represents “a continuation of the partisan bickering and media excess that began even before his inauguration.”

Democrats and the media have covered every development of the many investigations into Trump, tending into histrionics. That has, in many ways, obscured legitimate criticism of the president. By constantly overpromising and underdelivering, Democrats have guaranteed not only skepticism but apathy from voters outside their own tribe.

Take Schiff, who once claimed to be privy to hard evidence — which never materialized — of a criminal conspiracy between Trump and the Russian government. In his closing statement in the impeachment hearings, he argued that Trump's actions toward Ukraine go "beyond anything Nixon did."

At first Democrats set out to prove a quid pro quo charge, which has since been revised to “bribery.” The rationale was that it was a criminal concept that Americans could more easily grasp. Indeed, most people understand what constitutes “bribery,” but Schiff couldn't provide the evidence for it. Instead, he offered a slew of witnesses that depicted a self-serving, volatile and impulsive Trump.

None of that is a surprise to anyone who’s ever heard the president speak.

If lame-duck Republicans such as Will Hurd, who hasn't been afraid to be critical of the president, saw no “compelling, overwhelmingly clear, and unambiguous” evidence of “bribery or extortion,” who are you convincing exactly? To be sure, Hurd may change his mind. It's also possible that vulnerable Democrats will change theirs first. Recently, Rep. Brenda Lawrence, D-Mich., said she favored censuring, not impeaching, Trump: “We are so close to an election. I will tell you, sitting here knowing how divided this country is, I don’t see the value of taking him out of office.”

Now, she has backpedaled. But she may have stumbled onto a solution. If Democrats back out of impeachment, they will be scorned by the base as a bunch of simpering cowards. But the anger of the resistance fighter can never be satiated anyway. With censure, Democrats would be able to continue to condemn Trump without putting their vulnerable members in danger.

Here is a pertinent question someone might want to poll: “Based on everything you have seen, read, or heard about the allegations against President Trump and Ukraine, which of the following is the best way for Democrats to proceed? 1) Impeach. 2) Censure. 3) Nothing.” I suspect there’s a good chance Lawrence’s position would be the most popular.

David Harsanyi is a senior writer at National Review and the author of the book “First Freedom: A Ride Through America’s Enduring History With the Gun.”