It's unlikely that Donald Trump’s new Israeli-Palestinian peace plan will succeed. Yet, it’s the best of any recent offerings because it dispels poisonous fictions that have held back negotiations for decades.

The reality is that there will never be a Palestinian “right of return” to Israel, since such a policy would destroy the Jewish character of the state. Palestinians are not getting their great-granddads' houses in Jaffa back any more than the hundreds of thousands of Sephardic Jews who were expelled from Muslim lands after Israel's 1948 war of independence are reclaiming their property. The difference is that one of these groups accepted reality long ago.

Nor will Palestinians ever take control of Jerusalem proper. Any Israeli politician who broaches the notion of handing over the fulcrum of Jewish cultural, religious and political identity to Fatah is engaging in an act of political suicide. Palestinians have never administered Jerusalem, and they have no legitimate claim over Jerusalem. The current state of affairs is the status quo, whether Palestinians decide they want a state or not.

Likewise, Israelis will never pull back to pre-1967 lines, giving up its claims to the West Bank, because no sane nation would reinstitute unsecure borders next to an unreliable potential terror state.

The vast majority of Israelis who now reside in towns (“settlements”) built in historically Jewish areas aren't going to be displaced because the United Nations or Ben Rhodes has declared Judea and Samaria a no-Jew zone. Those towns are part of a de facto border whether Palestinians agree to a deal or not. 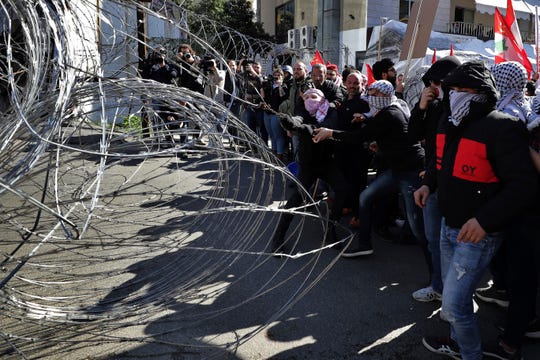 Hundreds of Lebanese and Palestinians demonstrated Feb. 2 near the U.S. embassy in Lebanon in rejection to a White House plan for ending the Israeli-Palestinian conflict. (AP Photo/Hassan Ammar) (Photo: Hassan Ammar, AP)

Finally, there is no way that Israel, a liberal democracy responsible for the security of its citizens, can hand over the Jordan Valley — an area with immense strategic importance irrespective of the Palestinian situation — to a newly created state that allies itself with unsavory nations and entertains the idea of entering into a unity government with Hamas, the theocratic terror group. Perhaps, after peaceful coexistence for a few decades, this could change.

The Trump deal would simply codify these realities while allowing Palestinians to finally have a startup state. Trump’s plan is the first to offer a map laying out what the final borders of the Palestinian nation might look like. In it, Israel cedes around 70% of the disputed territory in the West Bank to Palestinians but doubles its existing territory overall. “The sovereign capital of the State of Palestine,” the plan states, would be the city of “East Jerusalem.”

In return, Palestinians would recognize the existence of Israel, agree to solve their refugee problem through integration in their new state and in host Arab counties, and renounce terrorism. In other words, Palestinians would be asked to conduct themselves as does any normal, functioning state. The U.S. would also infuse $50 billion into the new Palestinian state.

Stateless peoples yearning for self-determination around the world — ethnic groups that Western elites don't care a whit about — would, no doubt, be ecstatic for such an opportunity. Palestinians, however, happen to have chosen the right enemies.

They just have the wrong leaders. President Mahmoud Abbas hasn't faced an electorate in 15 years and counting. His title of “president” falsely suggests that Abbas is the duly elected leader of a nation. Neither is true.

And while that is his own fault, Abbas and his deputies will no doubt sit in their U.N.-funded mansions while the Palestinian people suffer, waiting out Trump for more advantageous terms from a friendlier president such as Joe Biden — or Bernie Sanders, who could put Linda Sarsour in his administration.

But they won't be able to wait out Israel.

A nation with an open and vibrant economy has no reason to enter into a deal that upends its security. Most Israelis — I hate to break this to everyone — aren’t obsessed with the Palestinians. Hamas is largely contained. Fatah is contained. Israel’s existence isn't contingent on the creation of a Palestinian state, only on security.

Israel, in fact, probably feels less external pressure than ever to enter into a deal. Anyone who's followed this issue understands the historic significance of Bahrain, UAE, and Oman sending envoys to White House unveiling of Trump's peace deal. Arab nations are coming to terms with the reality of the Jewish State in ways that Americans progressives have not.

Nor is there more internal political pressure to enter into a bad deal. Benny Gantz, the Kahol Lavan leader and chief rival to Benjamin Netanyahu, “hailed” the Trump plan because, despite the effort of the American left to cast Netanyahu as the sole impediment to peace, no major Israeli party on either the right or the left is going to agree to a right of return, a return to pre-1967 lines, or a surrender of Jerusalem.

In the past, Palestinian negotiators sat back and rejected one concession after the next. 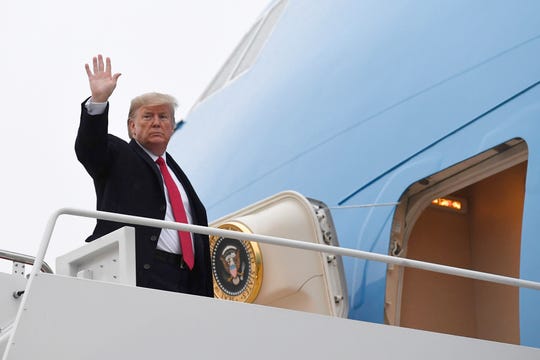 President Donald Trump waves from the top of the steps of Air Force One at Andrews Air Force Base in Md., Friday, Jan. 31, 2020. Trump is heading to Florida to spend the weekend at their Mar-a-Lago estate. (AP Photo/Susan Walsh) (Photo: Susan Walsh, AP)

They offered ever-growing lists of grievances while American leaders tried to pacify them. It's about time someone injected a dose of this reality into this situation. Trump's plan allows Palestinians to have a state in the world that exists. Or not.

David Harsanyi is a senior writer at National Review and the author of the book “First Freedom: A Ride Through America's Enduring History With the Gun.”