Opinion: It's been 75 years since US flag flew over Iwo Jima

"If land values were measured in the blood of heroes, Iwo Jima would be 'the costliest piece of real estate in the Pacific,' Heisler wrote."

Opinion: It's been 75 years since US flag flew over Iwo Jima

“The most beautiful scene in all the blue Pacific today is an American Flag whipping the breeze on the top of the Suribachi volcano.” — From the Feb. 24, 1945, Evening Sun

Seventy-five years ago this month, the United States military forces were fighting the bloodiest battle in their history. And a Baltimore Sun foreign correspondent was there to catch the scoop of a lifetime.

Iwo Jima, an island covered in volcanic ash, about 5 miles long and 2.5 miles wide at its broadest, sat roughly 600 miles east of Japan’s main islands. It had been made into a giant fortress, with deep caves and tunnels to underground bunkers and pillboxes, and more than 22,000 well-entrenched Japanese soldiers ready to defend it. The island was important for its airfields, from which Japanese fighter planes could attack U.S. B-29 Superfortresses heading to Japan.

In December 1944, the Americans had launched almost daily bombing raids on Iwo Jima. Then, in February, a huge American invasion fleet arrived. It carried, among others, Philip S. Heisler, a Baltimore Sun war correspondent and amateur hypnotist. He had traveled across the Pacific from Pearl Harbor, reportedly hypnotizing a group of pilots along the way so they could finally get a good night's sleep.

Heisler spent most of his first day on Iwo Jima in and out of foxholes with a division of Marines that was inching forward to capture one of the Japanese airfields, while being raked by mortar fire and snipers for many hellish hours.

But on Feb. 23 he was offshore, aboard ship. That’s when another marine division moved to take Mount Suribachi, Iwo Jima’s highest point, from which you could see the entire island. It was a slow task through withering fire. But at 9:40 a.m. that day, having cut off Suribachi from the rest of the island and, aided by aerial bombardments and artillery and heavy rainstorm, they raised the first American flag atop the summit. Marine photographer Louis Lowery was there to capture the event.

The cheers were deafening from all around the island and offshore, where Heisler was watching the events unfold. Then all hell broke loose, with the Japanese seeming to open up with every gun they had. The Marines held the summit using flamethrowers.

But their job wasn’t done. The Marines wanted to secure the first flag they planted for history and replace it with a bigger flag. The second flag was taken to the summit, with the Marines accompanied by Associated Press photographer Joe Rosenthall, Marine photographer Pfc. Bob Campbell and Sgt. William Genaust, a motion picture photographer. 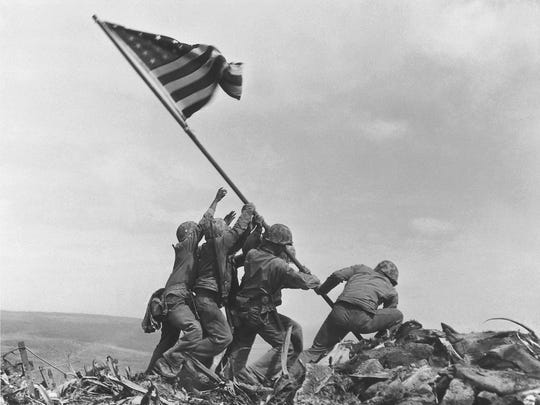 One group of Marines raised the second flag as another took down the first flag. Joe Rosenthal decided to focus on the second flag and took the iconic photo that became one of the most famous photographs in U.S. history, as well as a symbol of World War II, the Marines, American courage and much more. The photo won the Pulitzer Prize and became a U.S postage stamp in 1945 and 1995.

The photograph was later used as a model for the Marine Corps War Memorial dedicated Nov. 10, 1954. Gen. Lemuel C. Shepherd Jr., Marine Corps commandant, said in presenting the memorial to the people of the country that it is not “just a monument to a departed past. It is a graphic message to the future. May it stand for the ages yet to come as a symbol of American courage and determination of indestructible faith and unity of purpose.”

And Phil Heisler saw it all. He was the first journalist to file a report noting that the Marines had finally gotten the upper hand at Iwo Jima.

If land values were measured in the blood of heroes, Iwo Jima would be “the costliest piece of real estate in the Pacific,” Heisler wrote. The battle took the lives of nearly 7,000 American servicemen, and wounded 19,000 more. And over 21,000 Japanese soldiers also perished.

The flag raising became the subject for many movies and books. And the two flags are well preserved and now displayed at the National Museum of The Marine Corps in northern Virginia.

Paul M. McCardell is the Baltimore Sun’s librarian. His email is pmccardell@baltsun.com.