"The poor live among the abandoned homes overgrown with weeds. And they carry the city on their backs."

The United Nations considers water a human right. According to the U.N., the “right to water entitles everyone to have access to sufficient, safe, acceptable, physically accessible and affordable water for personal and domestic use.”

It’s not possible to live without water. We need water to drink, to cook and to take care of basic needs. It's not a luxury. It's something human beings can't go without. Many know of the water crisis in Flint and the children who were poisoned there. But not nearly as many have heard of the Detroit water crisis.

In Detroit, water is not affordable to all. Thousands of people have their water shut off by the city due to unpaid bills.

It's ironic that people who live in Michigan, a state blessed with a lot of water, and Detroit, a city on a river, have to survive on water provided by charities.

America is one of the richest countries in the world by per capita income with the largest economy in the world. No one is advocating for communism in this matter — water shouldn't be free. But there is a problem of dire poverty in Detroit, and the issue is affordability to the poorest citizens. 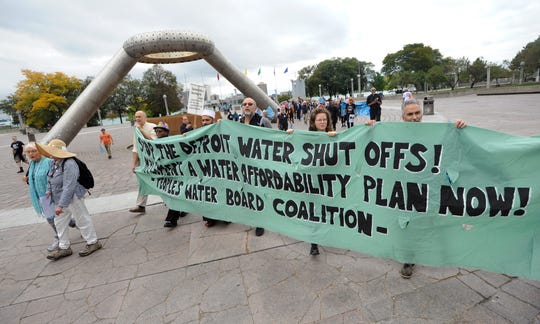 Detroit used to be a thriving city — the fourth largest city in the U.S. Then things took a downturn. The city now has a population of about 600,000 people. But it's the same geographic size — 142 square miles. The infrastructure of this geographically large city is being supported by an ever shrinking population. For this reason, Detroit has some of the highest water rates in the country.

This shrinking population with a high poverty rate is required to pay for the upkeep of a 142 square mile infrastructure.

We salute the organizations and the individuals who have been providing water bottles. But this challenge cannot be met with water bottles alone.

This crisis is a local, state and federal government issue. We urge Michigan’s politicians at all levels to put this issue on the top of their agenda. We see this crisis not just as a poverty issue but as a political issue as well. How can we ask citizens to vote or participate in the census when their very basic need — access to water — is compromised?

It is time to meet the promise of water as a human right by making water affordable to all — even the poorest of the poor.