"When you’re confronting what some pathologists warn could become the worst health crisis in a century, you need experts on your side."

Like Zombies emerging from the mist, leaders of the much-maligned Deep State are shedding their anonymity as coronavirus fear grips the nation.

But instead of seeking retaliation against a president who has mocked and belittled them for political expediency, the scientists and doctors and researchers and diplomats now moving to the fore are trying to save Donald Trump from himself — and just might save his presidency.

The spreading contagion is teaching Trump a bitter lesson:

When you’re confronting what some pathologists warn could become the worst health crisis in a century, you need experts on your side.

One of the medical generals in this sudden new war is Anthony Fauci, an immunologist whose cutting-edge AIDS research led to the first successful drugs against it. He now heads the NIH Institute of Allergies and Infectious Diseases. 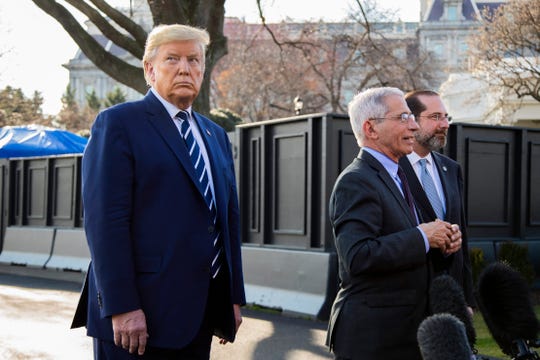 Fauci was unflinching in congressional testimony last week as he described the stark failure to develop readily available COVID-19 test kits months after those dreaded experts warned the White House that the virus was a serious threat.

Calling Trump’s claims to the contrary “not accurate,” GOP Sen. James Lankford of Oklahoma said, “We’ve got a long way to go to be able to get rapid, efficient testing.”

Lawmakers emerged from a separate, closed-door briefing shaken by expert estimates that COVID-19 could afflict 70 million Americans or more.

As their communities get hit by the virus; as friends and relatives are sickened or worse; as life as they know it grinds to a halt — the MAGA fanatics who’ve raged against “the Elites” might find themselves comforted to learn that the physician trying to save their loved ones has an Ivy League degree.

Step by faltering step, the current crisis is compelling our president to retreat in ways impeachment, Russian malfeasance and vulgar boasts about women’s anatomy could not.

In his initial responses to COVID-19, Trump dipped into his by now too familiar bag of tricks.

The virus, like the Angel of Death passing over the homes of Hebrews, would somehow spare Americans while ravaging the Chinese, the Italians, the Iranians and so many others.

The hit to stocks was only temporary; the market would come roaring back.

While his Democratic opponents canceled campaign rallies, Trump himself moved ahead with plans to address his adoring masses, though he later backed off.

But for the first time in his presidency, fast-moving events overtook Trump and his words caused immediate, tangible harm far worse than mere partisan rancor.

His bumbling, dissembling Oval Office address sent futures markets tumbling even as he spoke and caused the biggest one-day selloff in decades.

As late as Thursday, Trump still spoke from his alternative universe. He assured the nation that all people flying into the country, Americans and foreigners alike, were being tested — rigorously — for coronavirus. In fact, none were being tested.

Finally, scarcely two weeks after he said the country’s number of infections “within a couple of days is going to be down to close to zero,” the president declared a national state of emergency.

On Sunday, two days after declaring a national emergency, Trump said of coronavirus: “It’s incredible, but it’s something that we have a tremendous control of.”

Trump son-in-law Jared Kushner and anti-immigration adviser Stephen Miller crafted his disastrous Oval Office speech, filling it with the kind of ignorance that could only come from aides with no expertise in the subject matter.

His hastily assembled travel ban on most flights from Europe ignored the advice of Centers for Disease Control immunologists and other scientists who said it would drain resources from more urgent needs.

Trump’s aversion to science didn’t begin with him. In 2011, I covered the eventually failed attempt of Republican lawmakers, their ranks swollen by tea party ideologues, to cut annual funding for the NIH by $1.6 billion.

In 1995, new to Washington, I reported on Newt Gingrich’s crusade against “junk science” as he sought to gut major federal health agencies.

Trump, though, took his party’s longstanding hostility to new levels. His tweets and tirades against “the Deep State” exploited many Americans’ dark conspiratorial instincts.

Now the elite scientists, researchers and other experts who normally soldier on in silence are speaking up to stem a global pandemic.

And Trump, chastened by fears far beyond his control, is finally listening.

James Rosen is a longtime Washington correspondent who’s covered Congress, the Pentagon and the White House.