Opinion: Suspending the tax auction was long overdue. Let’s not bring it back

It's been possible all along, but public officials like the treasurer have been unwilling to do it.

Opinion: Suspending the tax auction was long overdue. Let’s not bring it back

The 2020 Wayne County tax foreclosure auction was cancelled. Wayne County Treasurer Eric Sabree said the decision was in the best interest of the “health, safety and financial stability” of county residents. This is the right decision in this moment and in the future as health, safety and financial stability are at the center of all foreclosures on owner-occupied houses.

Housing advocates and researchers such as myself have been arguing for a moratorium on tax foreclosure for years. In that time, the treasurer has claimed such a move was impossible under state law.

This despite knowing that houses in Detroit were overassessed, which led to people losing their homes to taxes they did not legally owe; despite knowing many residents facing foreclosure actually qualified for the poverty tax exemption but were unaware or unable to complete the process; and despite knowing that the primary auction buyers were building slum empires of blighted houses.

The treasurer’s decision this week demonstrates how arbitrary the foreclosure process is, and how unnecessary the last decade of mass tax foreclosures in Detroit has been.

In January, The Detroit News released an investigation conservatively estimating the City of Detroit overtaxed homeowners $600 million. Early reporting and research had demonstrated that Detroit had not reassessed the city following the financial crisis, a fact that officials in the city’s assessment office admitted to as far back as 2011.

The result is that thousands of people lost their homes to foreclosure when both the city and county were aware of these assessment issues. Though we are in the midst of a public health crisis and on the verge of a recession, the impact of the Wayne County Treasurer auctioning off over 100,000 residential properties from 2010-16 was a manufactured crisis that could have been stopped at any time, apparently by the treasurer. 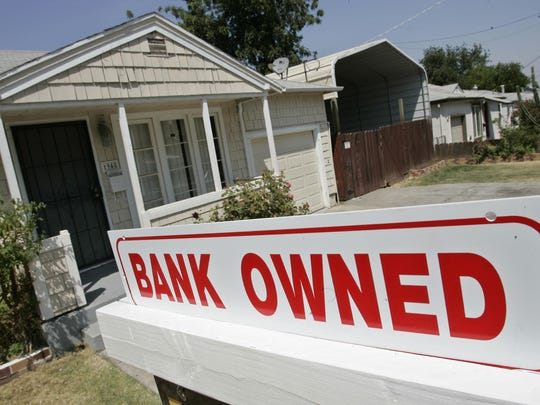 This Aug. 14, 2007, file photo shows a sign of a house under foreclosure in Antioch, Calif. As home values plummeted after the housing bubble burst in 2007, many borrowers with exotic types of loans were stuck, unable to refinance as lenders began to tighten their lending criteria. That set the stage for cascading mortgage defaults. (Photo: Paul Sakuma / AP, file)

Late last year, our research team produced a report on the impacts of the tax foreclosure on Detroit residents for Poverty Solutions at the University of Michigan. The primary policy recommendation in the was a moratorium on the Wayne County tax auction. Among the findings, investors and speculators buying out of the tax foreclosure auction were primary contributors to Detroit’s rising eviction rates.

These are not the evictions from the foreclosure but all of the evictions that follow. We also found that the city spent more than $36 million demolishing homes that were purchased by speculators at the tax auction and then abandoned. The Wayne County tax auction has been the primary pipelines for these buyers for years. This week’s cancellation of that auction demonstrates this was all preventable

There are many reasons for this, from the age of house to the limited care and upkeep of properties by bulk landlords, but the defining feature of these homes is that they were sold by the Wayne County Treasurer at auction. This week’s cancellation of that auction demonstrates this was all preventable.

It appears we are now facing a monumental crisis, and suspending the tax auction was the appropriate response. But this action demonstrates what was possible all along and what public officials like the treasurer have been unwilling to do.

When this crisis recedes it is essential we not return to business as usual, but instead work to implement a more humane, just and fair system that keeps people in their homes and gives them more than a chance at a better life.

Joshua Akers is an assistant professor of geography and urban and regional studies at the University of Michigan-Dearborn.