From the collapse of the Soviet Union to the 9/11 terror attacks, I’ve covered major historic stories. Never one like this, Rosen writes

A half century ago, the legendary Motown label produced yet another smash hit called “Ball of Confusion.”

Then, wearing their matching blue suits and spinning their synchronized steps, The Temptations sang about burning buildings, race riots and other inner-city violence that had spread across the country from Newark and Washington to Detroit, Chicago and Watts. 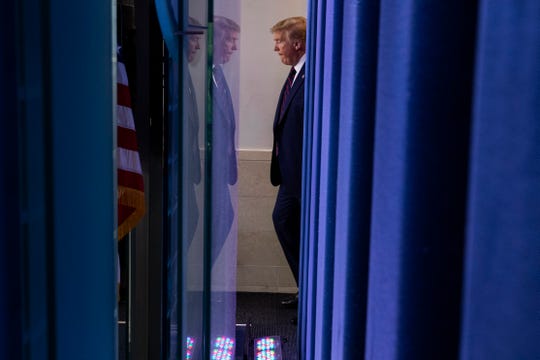 In this April 2, 2020, file photo President Donald Trump arrives to speak about the coronavirus in the James Brady Press Briefing Room of the White House in Washington. (Photo: Alex Brandon, AP)

Now a different plague has struck America, and somehow this one seems worse.

Here and in the nation’s other downtowns and beyond, there is only eerie stillness.

We have all become lepers.

Over the course of my career, from the collapse of the Soviet Union to the 9/11 terror attacks, I’ve covered major historic stories.

For the first time, I am struggling to stay on top of the metamorphosing COVID-19 story. The more experts I listen to, the more briefings I follow, the more coverage I watch or read — the more it slides away from me.

When I see a new set of figures, I launch my phone’s calculator and divide the number of total deaths by the number of cases. But instead of clarifying things, my calculations raise more questions:

In the United States, the current “ball of confusion” starts, of course, with President Donald Trump.

Careening from hope to fear, mutating from Neville Chamberlain one moment to Winston Churchill the next, spewing an endless stream of useful and useless information — Trump is the worst leader for the worst time.

Trump, though, is far from the only source of our dread. Far more ubiquitous than they were after the 9/11 attacks, television, the internet and social media broadcast a staggering stream of information.

As a cancer survivor, I wonder how Americans would feel if they saw that deadly disease’s grim figures rising on their screens by the hour.

With COVID-19 a novel virus, much of the 24/7 coverage is contradictory.

Recent days have seen encouraging reports about efforts to expand blood tests for COVID-19 antibodies in order, we’re told, to identify asymptomatic people who’ve had the virus and are now immune. Yet a tearful New York City medic who’d been hospitalized with it and then released said she was fearful of getting sick again.

As UCLA epidemiologist Anne Rimoin explained, each model is based on assumptions about future human behavior. The assumptions keep changing because our behavior keeps changing, varies from one region to another, and is difficult to predict.

Rimoin boiled down all the swirling information about COVID-19 to basic math: If we reduce social contact by 40%, we should see a 40% reduction in infections; if by 80%, then 80% fewer infections. She advocated that we all hunker down, for the long haul if necessary.

Thomas Friedman, the three-time Pulitzer recipient with The New York Times, offered a different perspective in a thoughtful column. Interviewing a range of highly credentialed economists and epidemiologists, he wondered whether shutting the country down too much for too long could take us back to the Great Depression — with worse physical and mental effects than the virus might produce.

Yet when Trump warned in typical blunt fashion, “We can’t have the cure be worse than the problem,” he was widely ridiculed.

The pandemic is laying bare the weaknesses of our core political system. Much of the time, the founders’ federalist scheme of power distributed among the different branches and levels of government produces the beneficial checks and balances they envisioned.

Now, however, differing and changing government restrictions at all levels contribute to the COVID-19 confusion.

The “lockdown” in effect for most of the country still allows for trips to the grocery store, the drugstore and other “essential” places.

Mental health experts recommend outdoor exercise as key to boosting the immune system, yet BuzzFeed and other aggregators regularly mock photos of joggers and hikers no matter how far apart.

Some public golf courses and tennis courts remain open while others a short distance away are closed.

After being accused of authoritarian tendencies for his entire tenure, Trump faced widespread criticism when he initially held off ordering General Motors Co. to start making ventilators.

Despite having declared himself a “wartime president,” Trump continues to hear appeals to take more power into his own hands as states compete with one another to buy masks, medical gowns and ventilators.

The bewildering truth is that this is a brand-new virus whose novelty hits panic buttons.

From Seattle, near where the first U.S. case was reported in mid-January, University of Washington immunologist Michael Gale said COVID is still largely a mystery to him and other scientists.

James Rosen is a longtime Washington correspondent who’s covered Congress, the Pentagon and the White House.