Henry Ford Medical Group takes on risk to study the controversial drug, hydroxychloroquine, to determine if it can treat the coronavirus.

No credible medical institution should be interested in a clinical trial for a COVID-19 drug that has not been proven to cure the virus, but is touted incessantly by President Donald Trump, who often gives questionable information during White House briefings on the pandemic.

Hydroxychloroquine has been ruled out as a treatment for the virus by the president’s own top coronavirus expert, Anthony Fauci, as well as other leading medical groups in the nation.

But that's not stopping Detroit’s Henry Ford Medical Group from putting its reputation on the line with the recent announcement of a study to determine if the drug can treat coronavirus.

The study, which Vice President Mike Pence welcomed, will involve 3,000 volunteers and will last up to four months with participants taking pills during an eight-week period.

“There simply is no data, there is no science for people who are exposed to COVID-19 that says, 'If you take this, it will protect you,' " says Dr. Steven Kalkanis, CEO of the Henry Ford Medical Group and senior vice president and chief academic officer for Henry Ford Health System. "We know from our resources here we could answer the question: Will this work? We feel that this study is going to provide that answer."

But Fauci, wouldn’t endorse it for treatment saying, “In terms of science, I don’t think we can definitely say it works.”

Another major push against the drug came from the leader of the nation’s top medical group.

Dr. Patrice Harris, president of the American Medical Association, told CNN the drug could cause more deaths and that she won’t prescribe it. “We should not be promoting any medication or drug for any disease that has not been proven and approved by the FDA," she said.

The AMA, alongside the American Pharmacists Association and the American Society of Health-System Pharmacists, issued a joint statement warning hospitals against its use.

The sea of skepticism from the highest levels of the medical community in the nation makes the Henry Ford study all the more baffling. 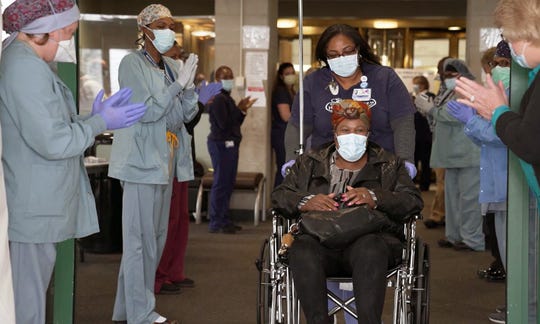 “It’s a balance between optimism and relying on science,"  Kalkanis says. "We’re not coming down on one side or another.”

“We are glad to see Henry Ford’s lead on this volunteer study that could help protect medical workers and first responders across southeast Michigan,” Duggan said.

Political support for the drug also came from Democratic State Rep. Karen Whitsett, who credits the drug for saving her life after testing positive for the virus. In fact, Trump invited the Detroit lawmaker to the White House on Tuesday where she shared her ordeal with the virus.

U.S. Rep. Rashida Tlaib, D-Detroit, remains concerned. “My concern has been and will continue to be our president haphazardly recommending the drug before any such research is concluded," says Tlaib.

"We’ve already seen a tragic instance of folks rushing to take the wrong iteration of chloroquine after learning about it from a news conference in which President Trump touted it and it costing a life. COVID-19 costs us enough lives on its own.”

The Henry Ford study, when it was first revealed, sparked some concerns on social media that reignited discussions about the 1932 Tuskegee experiment — the infamous and deadly syphilis clinical study on 600 black men, which greatly contributed to mistrust between blacks and the health care system. That concern is not misplaced in Detroit, the nation's largest majority black city.

Kalkanis says the study is not focused on blacks only.

“This study is open to everyone, regardless of race, gender or socioeconomic status. We expect to get people across racial and ethnic lines, which is important in any study,” he says.