Opinion: Whitmer should reveal her plan for rescinding restrictions

"The models on which the Governor based her decision weren’t just wrong, they were staggeringly wrong," writes McNeilly.

Opinion: Whitmer should reveal her plan for rescinding restrictions

On March 23, Gov. Gretchen Whitmer announced the suspension of life as we know it.

In discussing her first stay-home order, Whitmer claimed that without action seven million Michiganians could get the coronavirus, one million could be hospitalized and 460,000 could die.

If true, Michigan was on track to experience the most devastating COVID-19 outbreak on the planet.

The governor admitted under pressure that she’d borrowed the cataclysmic expectation from a model made in the United Kingdom and a website created by Democrat activists called COVID Act Now, a site that admits in fine print it was created to spur policy change — not predict actual outcomes or beat the virus.

What a difference a few weeks makes. The model in Britain has been updated and the doom it predicted downgraded significantly. The Democratic website has been exposed. Fresh modeling from epidemiologists using real data and real science has disproven the nightmare scenarios that Whitmer said were facts.

The latest data compiled and analyzed by the nation’s top infectious disease experts at the Institute for Health Metrics and Evaluation (IHME) now predicts roughly 2,400 Michiganians will lose their lives to COVID-19.

Every life lost is tragic. No one disagrees. But not everyone uses tragedy for political gain. Michigan has been harder hit by this crisis than almost any other state in the union.

It is probable that Whitmer has and continues to act with good intentions; or even that government mandated social distancing has saved lives and slowed the spread of the virus.

This doesn’t change one glaring fact: The models on which the governor based her decision weren’t just wrong, they were staggeringly wrong, and this calls into serious question their legitimacy. 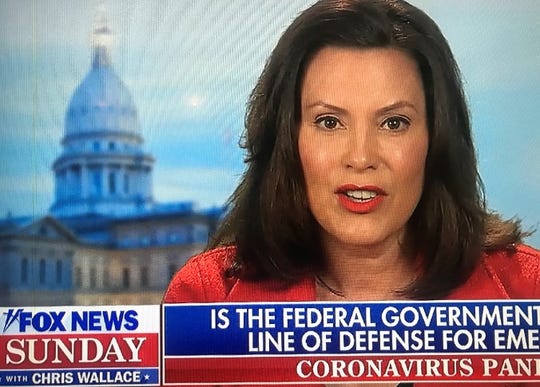 The twin virtues of humility and transparency would have created more trust among those who consent to be governed. Political leaders should trust us as well. They can be honest when they are making their best guess and cannot rely upon settled science at a given juncture.

This type of trust goes two ways. The more we trust, the more we confer legitimacy upon such edicts. The more legitimate a lock-down order is, the more it will be complied with is a general lesson of history.

Yet, instead of adjusting her approach in light of the newer, better data with many jobs that can be worked safely and communities that are not in crisis, Whitmer stubbornly tightened restrictions drawing unfavorable national attention for the arbitrary and authoritarian nature of her choices.

Amidst our sacrifices, Whitmer hasn’t missed a chance to appear on a late-night cable TV comedy shows, to engage in petty back-and-forth sniping with the president, or to carve out time to record podcasts on the vice presidential candidate circuit.

Meanwhile her state-run unemployment website chronically crashes leaving families frustrated that aid promised for the taking of their livelihood is further delayed.

The governor has never shared a plan, merely updates, on how to beat this pandemic and now seems almost blithely ignorant on the need for transparency on rescinding her restrictions. What’s the plan? Does she even have one? Whitmer shared words without benchmarks this week. It doesn’t measure up to criteria, or serious thinking. At best, it’s aspiration. It’s not the thoughtfulness Michigan requires.

What metrics does she need to see to let a job safely reopen? What figures or modeling will it take to stop threatening individuals with thousand-dollar fines if they travel between their properties? What — not when — specifically is she waiting for before lifting an order that’s locking in and entrenching poverty in the lives of hundreds of thousands — soon millions — of the people she was elected to serve?

Michiganians have led in social distancing before the state government caught up and started issuing its order, and they’ve done it selflessly. They can’t afford to do it much longer, and one suspects they’ll tolerate the pain less the more the reality of the situation fails to match their government’s predictions. To their credit, legislative leaders formed a bipartisan workgroup and spent the last two weeks crafting a real strategy to get families back to work. They’re expected to release a plan soon.

At least one branch of our government remains focused on the whole picture and seeks to provide a complex response to a complex challenge. Hopefully the governor will humbly listen.

Greg McNeilly is chairman of the Michigan Freedom Fund.