The governor and lawmakers shouldn’t have to fear for their lives when doing their jobs. But these changes should be made in accordance with law

John Truscott has worked around the Michigan Capitol for much of his career, and he holds the Lansing landmark in high regard.

“I love the building and its history,” Truscott says.

That’s why he was happy to get involved with the Michigan Capitol Commission, formed in 2013 and tasked with overseeing the upkeep of the Capitol and its grounds, hiring a manager and managing the budget. 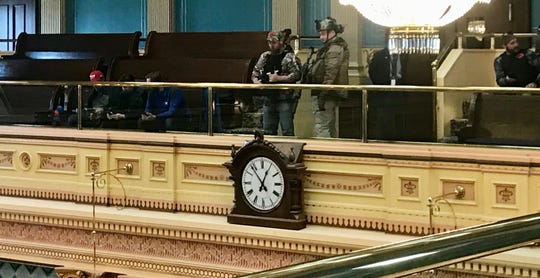 Truscott serves as vice chair of the six-member appointed commission, and he’s also principal and CEO of Truscott Rossman.

He's extremely troubled, though, by additional responsibilities that Attorney General Dana Nessel, Gov. Gretchen Whitmer and some lawmakers recently have sought to thrust upon the commission.

They expect this commission that makes decisions about flowers for landscaping and waxing floors to suspend citizens’ right to bear arms.

Rising tensions over Whitmer’s stay-home orders have led to disgusting threats of violence against the governor, as well as angry protesters bringing scary-looking guns into the Capitol, which has alarmed Democratic lawmakers.

Even as a Second Amendment advocate, Truscott doesn’t think weapons belong in the Capitol and he understands the safety concerns expressed by the governor and lawmakers.

But he also doesn’t think the Capitol Commission has the legal authority to limit citizens’ constitutional rights, despite Nessel taking the unusual step Monday of issuing a formal opinion on the matter after initially writing a letter Friday saying she believes the commission has that purview.

At a press conference Monday, following the commission’s decision to further study the matter, Whitmer said she was “disappointed” the commission didn't act immediately to restrict guns inside the Capitol.

The commission wasn’t going to be bullied into taking on this legally suspect role and huge expansion of its authority, however. Nessel’s opinion had come right before the commission’s meeting, and they hadn’t had time to properly review it.

Truscott says other states that have limited firearms in their capitols have done so through the legislature or through executive administrative rules.

That should be the process here, too.

Senate Majority Leader Mike Shirkey, R-Clarklake, denounced the threats against Whitmer during a Senate floor speech Tuesday, but also said it wasn’t right to stand “cowardly” behind the Capitol Commission. If protesters improperly brandish weapons in a threatening manner — not allowed under the law — then Shirkey said law enforcement should handcuff the offending individuals. He called on Nessel and Whitmer to make sure that happens.

Shirkey says he's willing to have the conversation about open carry in the Capitol galleries, but the commission is not the proper channel for that discussion.

Giving the Capitol Commission this kind of extended power could lead to wide-reaching implications. For instance, the commission could hypothetically shut down the building and keep the Legislature out.

“That's absurd,” Truscott says. “[The attorney general] gave us all this new responsibility that’s not in statute.”

If the commission is suddenly responsible for all workers and visitors in the building, that’s a huge increase in liability for the members.

Anyone who follows Nessel’s track record shouldn’t be surprised about how she’s handled this. When she’s not happy with a current law or policy, Nessel seeks to work around it.

For instance, last summer she gave the Michigan Civil Rights Commission — also an unelected body — the green light to continue investigating claims of discrimination against the LGBTQ community, even though the state’s Elliott-Larsen Civil Rights Act doesn’t yet include that language. The commission had blatantly violated a 2018 opinion from former Attorney General Bill Schuette, who said the commission didn’t have the authority to make or amend laws. In this case, Nessel stopped short of issuing a formal opinion (which holds the weight of law) as she did with the Capitol Commission.

In a statement about her latest opinion, Nessel said: “With this opinion, it is my fervent hope that the Commission acts responsibly and takes meaningful steps to protect the safety of those at our State Capitol because the wheels of democracy cannot freely turn under the threat of violence.”

The governor and lawmakers shouldn’t have to fear for their lives when doing their jobs.

But pressuring an appointed commission to take on a significant burden that’s not spelled out in the law isn’t right, either.

“We can’t let a crisis allow us to completely rewrite our laws and remake our government without considering all of the consequences,” Truscott says.