Speaking ahead of an event at a medical supply facility in this key swing state, Trump took aim at Joe Biden's mental faculties.

ALLENTOWN, Pennsylvania — President Donald Trump, speaking to the Washington Examiner ahead of an event at a medical supply facility in this key swing state, took aim at Joe Biden's mental faculties, at one point claiming his Democratic challenger "has absolutely no idea what's happening."

Trump was reacting to news that Biden had teamed up with former rival Sen. Bernie Sanders in naming Rep. Alexandria Ocasio-Cortez co-chair of a climate change panel, which Trump said would help cost Biden the state of Pennsylvania.

"If you asked him who he named, he wouldn't even know it," Trump said. "Joe has absolutely no idea what's happening. AOC is a disaster. She wants all fossil fuel out. She wants everything out. She wants wind, which is expensive — kills all the birds. You know, I'm also an environmentalist. But wind is a disaster." 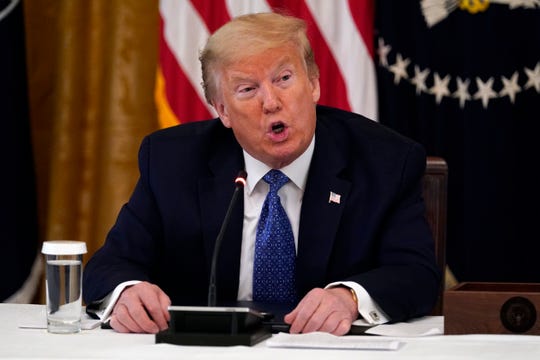 President Donald Trump speaks during a Cabinet Meeting in the East Room of the White House, Tuesday, May 19, 2020, in Washington. (Photo: Evan Vucci, AP)

By allying with Ocasio-Cortez and Sanders on energy policy, Trump said, Biden "lost Texas. He lost Pennsylvania. He lost North Dakota. He lost Oklahoma. And he lost every other state where fuel is important — like about most of them."

The issue was one of several that Trump used to take jabs at Biden's mental fitness.

Asked about the possibility that Democrats will not hold an in-person convention, Trump said, "I think that's a good move when you have Biden as your candidate."

Trump also said he looked forward to debating Biden in the fall, suggesting, "I know they want to try and get out of the debate by saying they won't be able to debate because of COVID-19."

Talking about the prospects of leading the economic recovery, Trump said: "Biden can't do it. He doesn't know he's alive."

Trump was here to tour an Upper Macungie Township distribution center for medical equipment company Owens & Minor, one of five companies in the nation selected by the Department of Health and Human Services to supply 600 million N95 respirator masks for hospitals and surgical centers.

The Virginia-based firm has sent gloves, surgical gowns and masks to health care facilities all over the country. In March, CEO Ed Pesicka was in the Rose Garden with the president and several other business leaders for a coronavirus task force briefing.

Trump's visit to Pennsylvania comes just as Gov. Tom Wolf dictated a plan that rolls out selective openings of the state — a move that has frustrated many rural counties that have been told to remain closed despite a moderately low number of cases and deaths. The governor has threatened dire economic consequences for counties that defy his order including withholding federal stimulus funds, revoking liquor licenses and making them ineligible for business liability insurance.

In the interview, Trump voiced support for the counties that are challenging the orders.

Pennsylvania is a key part of a region that includes Ohio, Michigan and Wisconsin, which ended their Democratic presidential voting streaks in 2016 to support Trump over Democratic nominee Hillary Clinton. A win in Pennsylvania is considered critical but not mathematically essential for the Republican president.

A new poll conducted by SSRS for CNN showed that nationwide, Trump trails Biden, but in the battleground states, which include Pennsylvania, 52% favored Trump, and 45% favored Biden.

Ahead of Trump's event, supporters were lined up for well over a mile, having waited hours to greet him, waving American flags and Trump signs.

Trump boasted of the crowds during the interview. "That's your poll," he said.

He also touted the prospects of Sean Parnell, who is challenging Democratic Rep. Conor Lamb for the 17th Congressional District in western Pennsylvania — exactly the sort of race that will be crucial to Republican hopes of retaking the House.

In the wide-ranging interview, Trump spoke about the upcoming election, the battle against the coronavirus, economic recovery, energy and China, among other issues.

Salena Zito is a CNN political analyst, and a staff reporter and columnist for the Washington Examiner. She reaches the Everyman and Everywoman through shoe-leather journalism, traveling from Main Street to the beltway and all places in between.