Opinion: Interact with history before erasing it

Sometimes you have to go back to where it all began to figure out where we are now and where we are heading, Zito writes

Opinion: Interact with history before erasing it

Jumonville, Pennsylvania — What happened here 266 years ago had repercussions so profound they changed the course of world history abruptly and irreversibly. A disputed moment occurred that led to the French and Indian War, the first true world war that would drag on for seven years, draw blood on five continents and have costs that would directly lead to a colonial uprising.

It was the first domino in a line of events that ultimately led to the formation of the United States. Sometimes you have to go back to where it all began to figure out where we are now and where we are heading.

After months of closure due to the coronavirus pandemic, Jumonville Glen, a picturesque and primitive ravine that is part of the Fort Necessity National Park, is finally fully open. 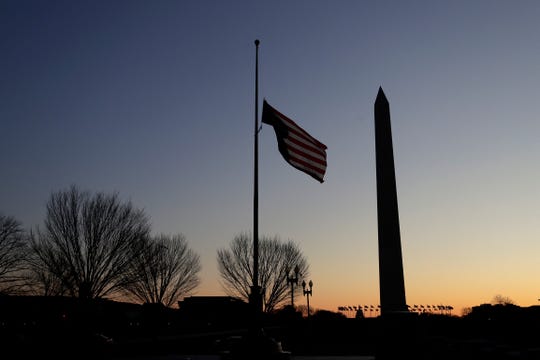 George Washington was a slave owner even at 22, but erasing history's physical existence does not erase what happened, Zito writes. (Photo: Julio Cortez, AP)

It was on this ground where the fate of the world was consecrated by the actions of Mingo chief Tanacharison, who was serving as a scout for George Washington, then just a young, ambitious lieutenant colonel for the crown who would mature into a combat veteran.

In his journal account, Washington wrote that the French went for their weapons upon seeing him and his men advance toward them in the thicket, prompting his soldiers to fire in defense.

The French saw it differently. They claimed they had no idea there were any British soldiers until they were fired upon. Because the countries were not at war with each other, the French asserted that what Washington and his soldiers did was nothing short of murder.

Washington vehemently disagreed, arguing that the French were hiding in the woods for days in the same remote place instead of letting their position be known, essentially behaving in a military capacity. In short, Washington argued he and his soldiers were in danger of an ambush and had no choice but to defend themselves and their camp.

One thing both sides agreed upon was that the slightly wounded commander of the French party, Joseph Coulon de Villiers, Sieur de Jumonville, was dead, scalped and killed by Tanacharison after the battle.

Within weeks, Washington and his men were forced into battle below Chestnut Ridge at a fort they appropriately named Fort Necessity. The colonial army swiftly fell to the French and their native allies, led by Jumonville's half-brother Louis Coulon de Villiers. In the surrender negotiations that de Villiers penned in French, a language Washington did not know, Washington signed a statement essentially affirming he and his soldiers had murdered Jumonville, a statement the French eventually used to justify war.

Brian Reedy, chief interpretation officer for Fort Necessity National Park, said a decent amount of the country will point to the Boston Tea Party as the impetus of the American Revolution. But the story truly begins here, said Reedy: "Where we stand had international ramifications. It led to the war where nearly a million would lose their lives, touched every continent except Australia and Antarctica, and it changed the world. Britain was the new superpower, and to support that empire and pay down the debts, it had to tax its colonists."

It was here a 22-year-old Washington changed the course of human events and went from boy to man.

"A lot of the lessons that Washington learned at Fort Necessity he carried with him until he ultimately became the commander of the Colonial Army," said Stephen Clark, superintendent of the National Parks of Western Pennsylvania. "Fort Necessity National Battlefield and Jumonville Glen are certainly sacred, hallowed ground, they are battles that oftentimes are overlooked by historians and the American people." 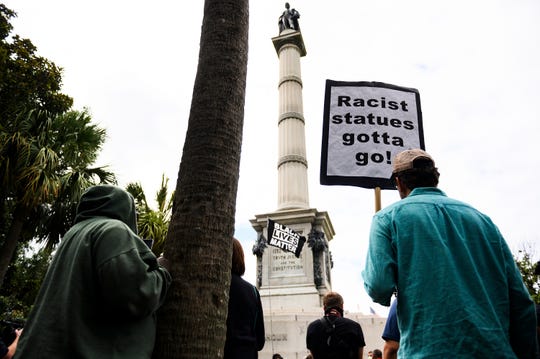 Protesters gather around the statue of John C. Calhoun at Marion Square in Charleston on June 17 during a demonstration in Charleston, S.C. (Photo: Josh Morgan, AP)

Just because it is unknown doesn't mean the weight of the moment is lessened.

In the past few weeks, we have seen monuments of men and moments defaced; statues toppled or defiled with paint, mud and other foul things, all done without a flicker of recognition by the rioters of who or what or why they are bent on destroying the symbols in front of them.

Protesters in Philadelphia defaced a statue of Matthias Baldwin, a hometown abolitionist in front of the iconic Philadelphia City Hall. His image was bathed in paint, the word "colonizer" spray-painted on the pedestal. Blocks away, the Tomb of the Unknown Soldier of the American Revolution was vandalized with the words "committed genocide."

Dishonoring the American flag has also become a rage across the country. Since the death of George Floyd, the flag has been set on fire, stomped on and spit at. It was also stood up for by New Orleans Saints quarterback Drew Brees, only for him to apologize not once but twice for initially saying, "I will never agree with anybody disrespecting the flag of the United States of America or our country."

Even a statue of Abraham Lincoln in Boston is favored by the mayor and the populace for removal.

Clark said none of the assets at the battlefield, the home of Albert Gallatin or the ridge where the first shots of the French and Indian War were fired have been touched by vandals, nor has there been a rallying cry for their removal.

Reedy said no one in history is perfect. Washington was a slave owner even at 22, and the treatment of the Mingo Indians has also faced scrutiny. But if people do not know all of the sides of what happened, if they don't interact with it, look at it and examine it, flaws and all, erasing its physical existence does not erase what happened.

If we continue in this lust of erasing history, as unpleasant and brutal as parts of it are, we'll never know if the enemy of my enemy is my friend, or if we've become our own worst enemy.

Salena Zito is a CNN political analyst, and a staff reporter and columnist for the Washington Examiner. She reaches the Everyman and Everywoman through shoe-leather journalism, traveling from Main Street to the beltway and all places in between.