The people of Michigan need answers. The families who lost loved ones deserve accountability, Walberg and Scalise write.

Throughout the COVID-19 outbreak in Michigan, Gov. Gretchen Whitmer has attempted to shield any criticism of her decision-making by repeatedly claiming to rely on the best data and science.

Except too often that data is kept under lock and key. And when you dig deeper into the myriad executive orders, a science-based rationale typically turns out to be lacking. Whitmer’s executive order on nursing homes is a case in point.

Under this mandate, some nursing homes in Michigan were forced to admit COVID-19 patients back into their facilities. As a result, thousands of elderly residents were needlessly put at risk.

From the outset of this pandemic scientists and health care professionals have told us that seniors were disproportionately vulnerable to this virus. As recently became public, just days after the first case hit Michigan the head of the state’s leading nursing home association wrote Whitmer with an alternative proposal that recommended against returning infected patients to nursing homes. The governor ignored this expert advice.

In doing so Michigan became one of only five states to pursue this misguided policy. Why was Michigan such an outlier at a time when most states reviewed the science and acted accordingly to protect vulnerable seniors? What’s more, why did it take so long for the governor to reverse course after it became indefensible to send such a lethal virus into nursing homes? These are questions Whitmer has yet to answer.

Months later, we still don’t know the totality of the harm this decision has caused. The data released by the state has been slow, incomplete and filled with discrepancies. Greater transparency is necessary.

What we do know is there have been at least 1,947 deaths among individuals who lived in nursing homes. That is more than 30% of Michigan’s COVID-19 deaths. Tragically, that number is likely higher. For starters, it does not factor in deaths in places like assisted living facilities around the state. Moreover, in one Detroit-area nursing home the state is reporting zero deaths, while the city says the death toll is 18. Examples like this call into question the reliability of the state’s data. 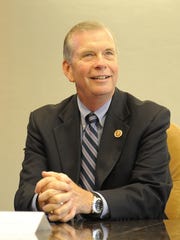 After all this, it’s no wonder criticism of Whitmer’s executive order has been bipartisan. Democratic state Rep. Leslie Love called it “an epic fail” and the “most idiotic thing we could come up with.” More Democrats in the Michigan legislature recently voted for a resolution calling for an end to this policy.

As members of Congress, we have asked Whitmer to provide documentation explaining her decision in a congressional hearing and in a letter sent through the Select Committee on the Coronavirus Crisis. Each time, she has stonewalled these requests. We will not stop asking.

The people of Michigan need answers. The families who lost loved ones deserve accountability. And policymakers should better understand what went wrong to learn from and prevent such fatal outcomes in the future.

It’s time for Whitmer to take responsibility for the consequences of her nursing home order, and own up to the fact that the science was simply not on her side. Seniors’ lives are depending on it.