A look back shows that the actions of the dam’s owner and state regulators played a role in its failure, Hayes writes

More than 2,500 homes were damaged by flooding in Mid-Michigan last month after a dam failed, leaving 150 homes and buildings ruined. About 11,000 people were evacuated, and flooding caused over $200 million in damages, though no deaths or serious injuries were reported.

People were left with the question: How did this happen? A look back shows that the actions of the dam’s owner and state regulators played a role in its failure.

Built in 1924, Edenville Dam is made up of an earthen embankment, concrete spillways, and a hydroelectric generation facility that supplied electricity to Consumers Energy until 2018. Behind the dam was a 2,600-acre reservoir called Wixom Lake. A few miles south, Sanford Dam formed the 1,569-acre Sanford Lake. 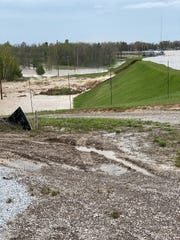 Five months before Edenville Dam collapsed, the Four Lakes Task Force signed an initial agreement with the dam’s owner, Boyce Hydro, to purchase the dam and its lake bottoms, as well as Sanford Dam and two other local dams. This community and volunteer effort planned to acquire the dams over a two-year period and bring them into compliance with state and federal standards, using funds from Midland and Gladwin counties and assessments on local residents. Although the task force had not yet taken possession of the dams, it had begun some initial repairs in 2020.

But from May 17 to 19, 2020, Midland County received 4.7 inches of rain, and Gladwin County, further upstream, received as much as 8 inches. Rising water levels in Wixom Lake washed away a 900-foot section of the earthen embankment, and water flowed downriver, swelling Sanford Lake and washing over Sanford Dam. Water inundated Edenville and Sanford and flooded low-lying portions of downtown Midland. The Tittabawassee River, which normally runs at approximately 11 feet, crested at the highest level ever recorded in Midland: 35.05 feet.

Edenville Dam had survived heavy spring flooding in the past. The National Weather Service reports that 11.78 inches fell on Midland County and 7.69 inches fell in Gladwin County from September 10 to 12, 1986, causing the Great Michigan Flood of 1986. And on June 23, 2017, NWS reported, “as much as 6+ inches of rain fell across Midland and Bay counties.”

Despite surviving previous natural storms, Edenville Dam faced a regulatory storm it couldn’t resist. Boyce Hydro’s battle with federal regulators came to a head when, in February 2018, the Federal Energy Regulatory Commission revoked the company’s license to operate the dam’s hydroelectric project. The revocation order cited a “long history of non-compliance” with federal regulations. Though the commission listed seven areas of concern, it focused heavily on the dam’s limited spillway capacity, the means by which operators control water levels in the dam’s reservoir, as the key failing.

A just-released inspection report, commissioned by the Four Lakes Task Force and completed by Spicer Group, Inc., agreed with that assessment. The Spicer report pointed out the dam’s spillway capacity could not even meet the relatively lenient Michigan standard, which requires only half of that required by federal regulations. FERC ordered Boyce Hydro to upgrade the dam so it would meet federal standards, but the company said it couldn’t afford the $8 million price tag. The company tried to get local residents to pay a portion of the costs but was rebuffed.

When federal regulators pulled the dam’s license, the Michigan Department of Environment, Great Lakes, and Energy took over as its chief regulator in September 2018. The state department’s initial engineering inspection, released in October 2018, noted that there were “no observed deficiencies that would be expected to cause immediate failure of the dam.”

After the dam failed on May 19, however, the department publicly claimed it had had "concerns" about the dam’s spillway when it assumed jurisdiction. In numerous statements to the media, EGLE officials stated they were waiting on a structural assessment of the dam, which they had expected to be completed by March 2020, but had never arrived. The Four Lakes Task Force pointed out that Spicer had not submitted the report to the state because “EGLE verbally instructed Spicer Engineering not to submit” it due to concerns over “classified information.”

With the dam's limited spillway capacity, Boyce Hydro repeatedly argued that water levels in Wixom Lake needed to be reduced. Drawdowns raised the ire of lakeshore residents, but the company argued that lower water levels helped to ensure employee, community, and infrastructure safety.

For example, in 2013, Lee Mueller, a manager at Boyce Hydro, reported that federal regulators were requiring the company to develop a flood plan to lower summer water levels in Wixom Lake by eight feet. Doing this would “offer a safety buffer for flood water discharge.” Boyce also pushed to lower fall and winter water levels to reduce maintenance issues and employee safety concerns caused by ice buildup on the dam’s spillway gates.

But the company’s lawyers argue that Michigan regulators “exclusively focused on environmental issues” and had sued Boyce Hydro for “dramatically lower[ing] the level of Wixom Lake for an extended period in [December of] both 2018 and 2019…, causing the death of thousands if not millions of freshwater mussels many of which are federally endangered.” Mueller charged the suit was proof state regulators “clearly care[d] more about mussels living in the impoundment than they do about the people living downstream of the dam.” Furthermore, he said, his company was put “under pressure from shoreline residents of Wixom Lake, the EGLE and the MDNR … to raise the water to its normal summer level” in both 2019 and 2020.

In a May 22 email, an EGLE spokesperson, Nick Assendelft, wholly rejected Boyce Hydro’s claims, arguing that “EGLE directed Boyce to follow the court-ordered lake level requirements.” He countered the company had “never suggested that maintaining Wixom Lake at normal and legally-required levels was any kind of safety risk.” Assendelft said again that the company had a “troubling track record of noncompliance and neglect.” He further argued that “Boyce’s assertion that its illegal emptying of Lake Wixom — to the detriment of property owners and the environment — was motivated by concern for the safety of local residents is false.”

Boyce Hydro claims it acted quickly on May 15, ahead of the coming storm, to once again begin drawing down lake levels. But clearly, it could not draw down water quickly enough. In the aftermath of the breach, numerous lawsuits have been filed against both Boyce Hydro and the state’s environmental department, and demands for an independent investigation are mounting.

Gov. Gretchen Whitmer has called for an investigation to be led by EGLE. A team of investigators has been recommended by Boyce Hydro, which will also fund the study. Both FERC and EGLE have approved the investigation team, which is now expected to complete the investigation independently. But this set up has been widely criticized because both Boyce Hydro and EGLE were directly involved in the lead up to the dam’s failure and have both publicly claimed the other is to blame.