Federal policing in Portland is not what we should expect in a nation long  heralded as a paragon of democracy and the rule of law, Bankole writes

Some cities have pushed back against President Donald Trump’s insistence on sending federal agents to prominent urban centers after the clash between agents and protesters in Portland.

In Detroit, the largest Black-majority city in the nation, the message that the administration of Mayor Mike Duggan is sending in response to federal officers being dispatched to the streets of Detroit in the coming weeks is an example of the unclear mission and weak leadership from City Hall.

“The Detroit Police Department has had the support of the Detroit community in making sure our city did not have a single store looted or a single fire started during the protests. We handled our issues as a community. We definitely have no need for any federal presence being sent in now,” according to a joint statement issued last Tuesday from Detroit Mayor Mike Duggan and police chief James Craig. 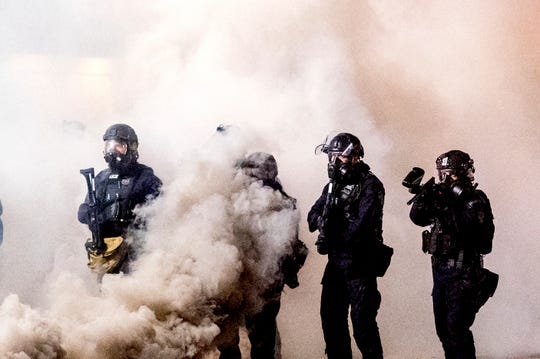 Days later, Craig pivoted: “It's no secret many of the large cities have experienced an uptick in violence. We are talking about enhancement to what was already on the ground.”

Craig moved from the message he and his boss Duggan issued earlier to now suggest that the deployment of federal law enforcement on the streets of Detroit is against drug dealers and violent criminals, not protesters. Such cooperation is an important element of tackling violent crime. In fact, dating back to the administration of former President Barack Obama, Detroit has always partnered in those areas with the feds in rounding up drug kingpins and getting violent criminals off the streets. That’s nothing new.

What’s new is trying to force cooperation in a tense reelection year where the daily antics of the president seem to signal an obsession with the outcome of the coming election. Forget the coronavirus uprooting our daily lives and leaving many families in limbo about what will happen this school year. Trump is shoring up his “tough on crime,” bona fides before the November showdown between him and Democratic nominee Joe Biden. Republican strategists need to know such action will not net them any significant votes in urban cities.

Reports of agents picking up protesters in Portland, and transporting them in unmarked cars reek of KGB style of policing. This is not what we should expect in a nation long  heralded as a paragon of democracy and the rule of law.

The response to federal officers in Portland and other cities is not only going to fan the flames of the current national outrage against unconstitutional policing and misconduct after the death of George Floyd, but it is going to make it more difficult for federal law enforcement to work with communities of color. After all, some of these officials will be here long after Trump leaves office, and they will have to deal with the mess that is being created now. They will have totry to repair the damage when he is no longer in office.

Lest we forget, these agents live and interact in our communities. In fact, I was reminded of that in 2015, when I accepted an invitation from the U.S. Attorney’s Office for the Eastern District of Michigan to be a speaker during Black History Month. My remarks before a room of federal prosecutors and agents quickly turned to discussion about pervasive and systemic racism, the place of Blacks in Detroit’s economic revitalization, equity and lack of trust between Black people and law enforcement.

I recalled that after the program, two Black agents from the Department of Homeland Security who were taken in by my remarks indicated they wanted to continue the discussion around race and racism. They recognized that as Black people, we can never escape the scourge of racism, no matter the positions we occupy.

Detroit is a racial powder keg. The city’s endemic poverty and inequality remain in the midst of an economic recovery. That has frustrated Detroiters and created resentment. The last thing Detroit needs is what happened in Portland to take place here.

Duggan and Craig must show leadership that adheres to constitutional policing.

Catch “Redline with Bankole Thompson,” which broadcasts at 11 a.m. weekdays on 910AM.