Auburn Hills — Shania Twain’s Rock This Country tour swooped into the Palace of Auburn Hills on Saturday night with a little bit of country and a whole lot of rock. 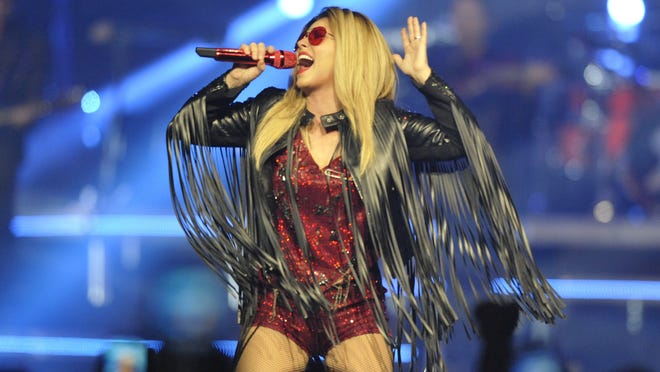 The country superstar’s 100-minute concert — her first Metro Detroit show in a dozen years — was a rock and roll extravaganza, with more pyro than a Kiss concert and more leather than a Mötley Crüe show.

How did we get here? Let’s review. Twain is country’s all-time best-selling female artist, a title she earned thanks to her massive collaborations with her producer and husband Robert “Mutt” Lange, who poured some sugar on Def Leppard and turned them into pop-metal immortals. With Lange at the helm, Twain netted three consecutive 10 million-plus selling albums, a feat unlikely to ever be duplicated.

But in 2004 she dipped out of the spotlight and later suffered a series of setbacks, including a nasty split from Lange and a bout with dysphonia, a disorder which affects one’s vocal chords and nearly sidelined her career. She returned to the stage with a Las Vegas residency in 2012 and her current tour is her first outing in more than a decade, and she’s only released one new song — the self-affirming “Today is Your Day” — since 2005.

Twain turns 50 next month, and she joked about her age on stage in front of the nearly sold-out Palace crowd. “I was born in Windsor, on the other side of the river,” she said, receiving strong cheers from the crowd’s healthy Canadian contingent. “I’m not even sure the hospital is there after all this time!”

But Twain is still standing, and while she wasn’t able to match all the bombast going on behind her – lights, lasers, flames, fireballs – she sold the show with confidence. There were times when her voice sounded strained and when her shoulder dips and hair flips came off stale, but she projected a veteran’s air of craftsmanship while still coming off humbled by the enthusiastic crowd.

She opened with “Rock This Country,” sporting a pair of red shades, a tassled black leather jacket and thigh high black leather boots, while a blinding wall of lights lit up behind her. Twain strutted across the stage and down the catwalk that stretched out to the floor, kneeling down to slap hands with fans, who twice threw bouquets of flowers onto the stage.

During “Any Man of Mine,” Twain boarded a small cart and rode around the perimeter of the arena floor, greeting fans and performing while holding a selfie stick whose footage was projected onto the stage’s screens. And for “Up!” she straddled a mechanical bull that rose up and over the crowd — all while telling the fans the difficulty she once had in overcoming her stage fright.

That stage fright never seemed to be an issue, and during “Today is Your Day,” she stripped away all the razzle-dazzle of the evening and performed a sparse acoustic version of the song with her seven-piece band. “I’ve decided that every day, for the rest of my life, is my day,” she said, rolling into “No One Needs to Know” and “You’re Still the One,” her monster ballad that is one of her most towering hits.

There were some cheesy moments — the pyramid of lights that formed above her during “From This Moment On,” the pair of tigers (or were they cougars?) on the screen during “That Don’t Impress Me Much” — but Twain was never going for cool points. Her show was a rock country showcase that set out to singe your eyeballs, and it delivered plenty of heat.