Adam Graham: Grieving an artist’s loss in the Purple Rain

Loss of the music icon, and how we as a culture mourn the death of our most celebrated performers says a lot about us

Adam Graham: Grieving an artist’s loss in the Purple Rain 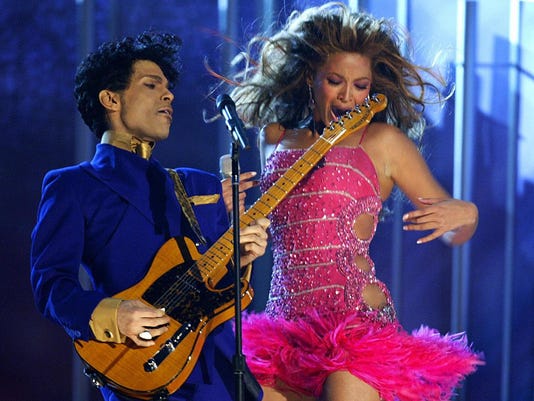 Prince and Beyoncé perform at the 46th Annual Grammy Awards at the Staples Center in Los Angeles in 2004.(Photo: Timothy A. Clary / Getty Images)

It usually starts with a report from TMZ that we all hope is false. It’s just TMZ, right? But it’s time we start learning TMZ is rarely wrong in these instances.

Hopeful denial then gives way to begrudging acceptance as more news reports roll in. Then come the flood of tributes and remembrances. It’s a hyper-speed version of the seven stages of grief, remixed for our digital age.

The news of Prince’s death hit with a wallop early Thursday afternoon, casting a purple haze over the week that we’re still living inside. This one hurt, and it’s going to continue to hurt. Prince was a titan, and he wasn’t supposed to go this early.

Reports — led again by TMZ, the most powerful celebrity news outlet on the planet — paint the death as a drug overdose, though it will take a while for toxicology and autopsy reports to come back. But for now, there are the stories, the memes and the music that we use to pay tribute to the incredible artistry of Prince, one of the best to ever do it.

It’s a familiar cycle, though Prince’s death amplifies it because his footprint was so massive. We did it with David Bowie in January and with Michael Jackson in 2009, and on a smaller scale every time a celebrity of note dies.

Few of us actually knew Prince, but most of us felt a connection to his music. And that connection is why we mourn his loss.

Is it silly to grieve over the loss of a performer? Not at all. Musicians and filmmakers make art that touches us and helps us work through our own feelings about life. We associate certain songs and certain movies with feelings of happiness or sadness about the world we live in. Art helps contextualize our lives. It’s only strange to mourn an artist’s loss if you think it’s also strange to feel.

Losing an artist is not by any stretch the same as losing a friend, a family member or a pet. Those losses are intimate and personal and become a part of us going forward. Artist and musician deaths are public, shared events that are mourned as a community. The grieving isn’t as intense — you’re probably not going to call in to work to take a few days off over the loss of Prince — but it’s still valid.

That is why people came together to listen to Prince’s music in the streets of New York, Minneapolis and even at the Majestic Café in Detroit this week. That is why people will be playing his music all weekend, all month and all summer long. That is why pretty much every artist that is currently on tour will be working a Prince song into their setlists.

His music meant a lot to a lot of people — both the artists that make music and the fans who consume it — and playing those songs is the best way to acknowledge that connection was felt and will continue to be felt through his music.

When an artist dies, especially one who had the impact of Prince, we don’t just mourn their death. We also mourn the loss of what that artist meant to each of our lives.

So when TMZ posts of a shocking death, that’s part of the reason we hope it’s false. Because we know the grieving process is about to start all over again.