Taylor Swift lays her old self to rest on her new track, which oddly doesn’t have too much life 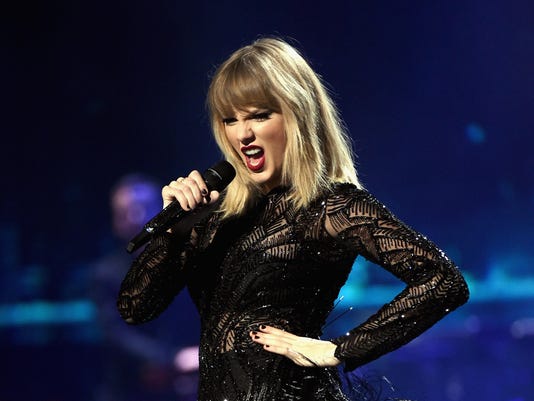 Taylor Swift sends a message to her detractors in “Look What You Made Me Do,” her new single released Thursday.(Photo: Kevin Winter / Getty Images)

Are you getting all this?

This is the meta-narrative of the new Taylor Swift single “Look What You Made Me Do,” which was released Thursday night and, for a few hours at least, was the only thing to get the internet’s collective hive to shut up about Donald Trump.

The single is a screed against her detractors — probably Kim and Kanye, maybe Katy, possibly “haters” in general — that puts drama and image overhaul front and center. (The song ends with a skit where Swift writes her own obituary: “I’m sorry, the old Taylor can’t come to the phone right now. Why? Oh, cuz she’s DEAD!” she says. Subtle it’s not.)

The problem with “Look What You Made Me Do” — the first offering from Swift’s new album “Reputation” due Nov. 10 — is that Swift forgets to have any fun, and as a single, it’s a dud.

It’s overly concerned with reclaiming the narrative of her ongoing feud with Kanye West, which dates back to the 2009 MTV Video Music Awards and which everyone is totally exhausted with by now. Surely there are other things in the world to write about: the turmoil in our country, growing up and coming of age, whatever. But nope, we get the continuation of this feud (which was teased with videos of a snake biting back, a callback to an earlier Kim Kardashian tweet which, oh, who cares.)

But now it seems the snake has swallowed its own tail. This is the TMZification of pop music, where feuds and dragging and trolling become more important than the music itself. Perhaps the “You” of the title is us, the audience, we made her do this, and she’s fulfilling our bloodlust and our obsession with celebrity feuds. But in this case it doesn’t make for very good art.

Swift’s strength is bold, bright pop music, which is so catchy even her most ardent detractors end up singing along. But on “Look What You Made Me Do,” Swift sounds cold and lifeless in her attempts to mimic a villain queen. Not every image makeover is successful. (Just ask Garth Brooks’ alter ego Chris Gaines.)

Image overhauls are nothing new in the pop world; Bowie and Madonna made makeovers part of the pop rulebook. But they have to fit the artist, and this one doesn’t suit Swift. This is the performer who during her last tour paused to tell the young girls in the audience they could be whatever they wanted to be when they grew up. What kind of speeches are we to expect from this “new” Taylor? Ones about libel suits and bouts of self-imposed media exile?

Many of these transgressions could be overlooked if “Look What You Made Me Do” — built on a bed of cavernous hip-hop bass, electroclash whiplashes and hand claps, and plinking piano chords — had bounce, but it doesn’t. It’s flat. Listen to it three or four times and then try to hum it — you can’t.

Of course “Look What You Made Me Do” will earn a ton of listens at first — it may even debut at No. 1 on Billboard’s Hot 100 chart, ending “Despacito’s” epic reign atop the chart — but it doesn’t have the replay value of Swift’s previous hits.

If her career to this point has been defined by her making a series of smart — if calculated — decisions, she’s just made her first misstep. The “old” Taylor Swift is dead, and the new one’s not off to a very good start.