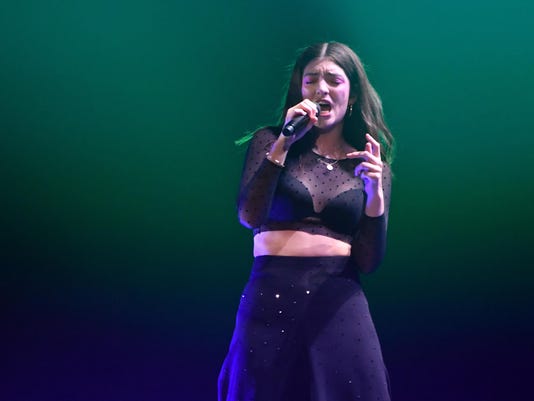 Perfect places are important to Lorde. She even has a song about them, titled “Perfect Places.”

But a half-full Little Caesars Arena was not the perfect place for the pop singer’s concert Wednesday night, which would have been, well, perfect just down the street at the Fox Theatre.

The staging of the show, an intimate, performance-art piece built around interpretive dance numbers and long stretches where Lorde was the sole performer on stage, would have fit the Fox. There were no production elements — pyrotechnics, flying rigs, etc. — that necessitated an arena setting.

Most importantly, Lorde isn’t an arena performer. Not yet, at least. Arenas are their own animal, and you have to play to that kid in the back of the room just as much as the screaming superfan in the front row. It takes over-the-top charisma, star power and attitude to pull it off. That comes with time and experience, not by making the leap to arenas before one’s time.

That said, the same show at the Fox would have been a door buster.

The 21-song, 100-minute set kicked off with “Sober,” with a team of six dancers performing on stage and Lorde, along with her three-piece band tucked away at the back of the stage, obscured in shadow. Midway through the song, the spotlight hit the 21-year-old, and she sauntered to the front of the stage, welcomed by screams of approval. Dressed in a black mesh top and flowing black pants, Lorde worked out jerky hip-hop infused dance moves like she was dancing in front of her bedroom mirror.

“It’s been sometime since we were here,” she said following “Homemade Dynamite,” the set’s fiery second song. Indeed, her last Detroit concert was four years ago on the nose at the 2,000-capacity Fillmore Detroit.

At that show, the then-17-year-old was only six months removed from the release of her debut album “Pure Heroine,” and was still learning how to work a crowd.

Several years and some giant festival gigs later, she has gained confidence and chops as a performer, and those skills were on full display during knockouts like “Tennis Court,” “Ribs” and “400 Lux,” which echoed throughout the arena with explosive power.

The revved up “Green Light” came late in the show and was the dance party throwdown of the night; it was so energetic, punctuated by a climactic raining confetti shower, that it should have opened the concert and set the tone for the night. The closer, “Team,” sent waves of rattling bass washing across the crowd, another high point in the show.

Some of the evening’s smaller, more intimate moments escaped the singer, however.

A mid-show stretch of solo ballads were swallowed by the size of the venue, especially the heartbreaking “Liability,” which was rendered flat by the sparse production. (When Lorde performed it on “SNL” last year, wearing a wedding dress and bridal veil and with Jack Antonoff seated next to her playing piano, it was one of the show’s most moving performances in years.)

Aside from a few thin video screens at the back of the stage, the show’s main production element was a clear rectangle box which sometimes housed Lorde’s team of dancers and at one point acted as her on-stage changing room. Its meaning likely had to do with transparency, both physical and emotional, or maybe it was just a box that looked cool on stage.

Lorde’s between-songs banter was chiefly of the aw-shucks variety; the New Zealand native remarked several times how overwhelming it felt to have people connect with the songs she wrote, and she also mentioned recent American discoveries such as Uncrustables sandwiches and Blue Moon beer. She came across as down to Earth and genuine, your friend the pop superstar.

Which would have come across even better in a theater setting. So like a college player leaving early for the pros, why the premature leap to arenas? It may make financial sense, but fans weren’t ready for it, as proved by the curtained-off upper deck on Wednesday. Vibes are important to a concert, and it takes a lot of them to overcome thousands of unsold seats.

Where was everybody? Well, hits sell tickets, and Lorde hasn’t had a genuine one in four years; her 2017 sophomore album “Melodrama” hit No. 1 in the U.S. but its highest-charting single, “Green Light,” peaked at No. 19 on Billboard’s Hot 100 chart.

While the concert hit the right emotional notes, the venue wasn’t the right fit. There’s still no substitute for the old-school art of building from one level to the next, and Lorde proved the importance of perfect places, and finding the right ones to call home.