Awards shows are down across the board. Are they worth saving?

Awards shows are down across the board. Are they worth saving? 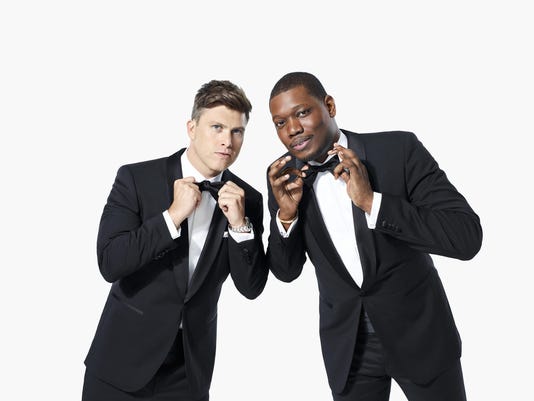 Another awards show, another record low for viewership.

Ratings for Monday's Emmys were in the tubes, with just 10.2 million viewers tuning in to watch Amazon's "The Marvelous Mrs. Maisel" win best comedy and "SNL's" Michael Che and Colin Jost throw light jabs at the audience.

Are awards shows — the glittery, star-studded, self-congratulating staples of the annual television landscape — dead? Not even close. Nothing is going to stop Hollywood from handing out awards to itself; the apocalypse could turn most of us to dust and there will still be an awards show where Ryan Seacrest will be standing on a red carpet asking the cockroaches who they're wearing.

So what can they do to stop bleeding viewers? That's difficult to parse. First it's important to understand why ratings are down, across the board, for live TV events. (Even the Super Bowl was down this year.)

The main reason is there's no longer a shared center in the American experience. Options have become too vast; three channels have exploded into 5,000, and all the noise from cable, streaming networks, the internet, even video games have fractured the cultural whole, shattering it into a million tiny pieces.

Ask 10 people what they watched last night and you're likely to get 10 different answers. Fifteen, 20 years ago that wasn't the case and awards shows tended to reflect what most of us were watching.

Next is cord-cutting, which has taken many millennials out of the traditional TV viewership pool. And if there's something worth commenting about on a show, they'll hear about it later, in a video in their personalized feed. Why sit down and watch an entire show when you can catch up with the memes later?

Then there's politics, and the fact that half the country has no interest in watching what they perceive as a parade of celebrities making political statements. Shut up and act, they say. So they're not tuning in, either. 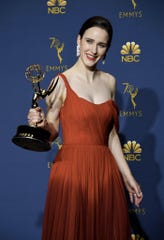 Lead actress in a comedy series winner Rachel Brosnahan poses with her Emmy during the 70th Emmy Awards at the Microsoft Theatre in Los Angeles, California on September 17, 2018. ( (Photo: AFP/Getty Images)

There's also a disconnect between what's being awarded and what's striking a chord with audiences. "The Marvelous Mrs. Maisel" may well be a fine show, but your average "Big Bang Theory" fan has never heard of it, and likely isn't going to tune into a streaming show about a '50s housewife and her attempts to break into stand-up comedy. Same goes with "The Shape of Water," this year's Best Picture Oscar winner, which was seen by less people than the fluffy canine drama "A Dog's Purpose."

So what do you do? Water down the shows to make them more inviting to general audiences, or keep marching forward toward irrelevancy?

General audiences need to be acknowledged. "Elite" has been turned into a bad word in our current political landscape, and the e-word gets tossed around when shows and movies that most people don't see are handed top awards.

But were awards shows ever entertaining? Maybe they were always a slog, and we're romanticizing them in our heads. No one is going back to sit down and watch the 1989 Academy Awards in full because it was such a well-produced telecast. Awards shows are about moments, and it's those moments that stick out and make them memorable.

Maybe all we needed was the memes all along: Jack Palance doing one-armed push-ups on stage, Roberto Benigni standing up on top of his chair, "La La Land" accidentally being named Best Picture over "Moonlight": You can't plan for those, those happen in-the-moment.

Stars might help, but they're not going to save the day. In recent years, awards show hosting gigs have all gone to late night funnymen: CBS gave the Grammy gig to James Corden, Jimmy Kimmel mans the Oscars on ABC and "SNL" stars Jost and Che got the Emmys job. How 'bout hiring someone we can't already see literally five nights a week on TV? Calling up Ryan Reynolds or Oprah would bolster the excitement level, but it's not going to bail the shows out completely.

And the shows themselves don't need to be so drawn out. Present the top categories on TV, hand out the others on a pre-show broadcast. That's what the Grammys do, and they're the one major awards show that didn't plunge to record-low viewership this year. (They were down 24 percent from the year before, but still well above their 1995 low. Good news!)

We don't need awards shows, they are not essential to our lives. But they are fun, glitzy affairs, and they give closure to the annual entertainment consumption cycle. The awards tell us about who we are and where we are as a culture, and they influence the types of content that get produced going forward. And they deserve a good presentation.

There's a reason awards shows are one of the fundamental elements of the entertainment landscape, and aspects of them are worth preserving. They'll never return to the cultural highs of their heyday, but with some repairs, perhaps they'll stop sliding off a cliff to indifference. Do it for Seacrest; he has important questions to ask.