Touring artists make big money by saying bon voyage, which is why they keep doing it

Touring artists make big money by saying bon voyage, which is why they keep doing it 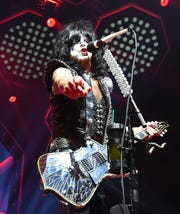 Hey you! Yes, you. You're a sucker if you think Kiss won't play Detroit again. (Photo: Daniel Mears, Detroit News)

Rock stars have been retiring and un-retiring almost as long as there have been rock stars, and the farewell tour is one of the oldest tricks in the book.

Kiss itself has played the farewell tour card before, launching the Kiss Farewell Tour in 2000, before returning three years later with its World Domination Tour (and a half dozen tours after that).

So was Wednesday truly Kiss’ last show in Detroit? If you believe that, I’ve got a sweet Kiss coffin to sell you.

Kiss is one of several artists currently touring on what it says is its goodbye run, which is highly lucrative for artists. They know crowds might not come out for any old show, but the prospect of it being the final time brings out fans who might otherwise sit it out.

Fans have been burned so many times by so-called "farewell" outings that Mötley Crüe signed some sort of agreement that its final tour would really be its last go around. And even then, people doubted it.

Here’s a look at current and recent farewell tours, along with educated guesses at the likelihood of those artists really throwing in the towel.

Kiss: As previously stated, the face-painted rockers have already done one “Farewell” tour. Are they brazen enough to do it again? It’s Kiss, so of course they are, but it’s likely they’ll just keep adding legs to the current outing, which is dubbed the “End of the Road World Tour.” Just look at the currently announced shows: the final date is set for New Zealand in December. Do you really think Kiss is going to play its final concert in frigging New Zealand? And when has Kiss ever left money on the table? As sure as you can say “Lick It Up,” they’ll be back.

Elton John: Elton John hit Little Caesars Arena for two dates on his “Farewell Yellow Brick Road” tour in October, a tour he has already said will stretch until at least 2021. The trek is currently winding through the U.S. and returns to North America in the fall, but only around two-thirds of the tour’s 300 dates have been announced. When it’s all said and done, “Farewell Yellow Brick Road” is likely to be one of the highest grossing tours of all-time, and Elton probably won’t stop until he achieves that feat. The Yellow Brick Road is sure to wind through Detroit again.

Slayer: Metro Detroit audiences waved goodbye to the heavy metal stalwarts last May at Freedom Hill, or at least they thought they did: Ta-da, the band is back playing DTE in May. So is this it? It’s tough to say: lead vocalist Tom Araya has well-documented neck problems that prevent him from banging his head, and the band’s demanding, aggressive style no doubt takes a physical toll on its members. But Araya is just 57 years old and guitarist Kerry King is a relatively sprightly 54. If they indeed retire — what does Slayer do in retirement? — a Reunion in Blood a few years down the road seems likely.

Cher: When the living legend swung through Little Caesars Arena last month, she made jokes about what she’ll perform on her next farewell tour. (She already retired from touring once, with her “Living Proof: The Farewell Tour,” which ran from 2002-2005.) Her movements weren't as limber as they could have been, but as long as she’s got several semi-trucks full of wigs, there’s nothing that's going to keep Cher from the stage. You don’t have to turn back time, you can set your watch to Cher coming back again.

Paul Simon: Simon’s “Homeward Bound: The Farewell Tour” played DTE last June, and there’s little reason to believe he wasn’t serious about it. Simon is 77, and his last album, “In the Blue Light,” looked back at some of his lesser-known songs and re-imagined them in a new musical context. Simon seems to be putting a bow on his career of 50-plus years. But there’s always the possibility, thin though it may be, of a reunion with Art Garfunkel, which would mark the duo’s first shows together since 2010.

Ozzy Osbourne: Ozzy's Crazy Train last came through the station with a DTE show in September, and the singer’s “No More Tours II” outing — a winking reference to his previous “No More Tours” run of dates in 1992 — has shows scheduled through July. That final show is set for the Hollywood Bowl, which would be a fitting end for Ozzy, but all that time away from a stage might drive him nuts. Odds of a “No More Tours III” seem high.

Bob Seger: The Michigan rocker is currently rolling on his “Roll Me Away: The Final Tour,” and he has six dates planned at DTE in June, wrapping with a June 21 concert. While there’s every reason to believe this is Seger’s last hurrah, we likely have not seen the last of him in Detroit; a carefully worded press release announcing the final two DTE dates noted they would mark the “final ‘Pine Knob’ shows of the Roll Me Away tour,” leaving the door wide open for additional concerts at venues other than DTE — Little Caesars Arena, perhaps? — or DTE shows separate from the Roll Me Away tour. You've got to look closely, because when it comes to farewell tours, the truth is in the details.