Graham: While superheroes took summer off, it was 'Hamilton' to the rescue

In a weird year, the Disney+ streaming smash gave us a different kind of summer blockbuster

Graham: While superheroes took summer off, it was 'Hamilton' to the rescue

In a weird year, the Disney+ streaming smash gave us a different kind of summer blockbuster

At the movies, summer is historically the playground for superheroes, dinosaurs and giant robots from outer space. 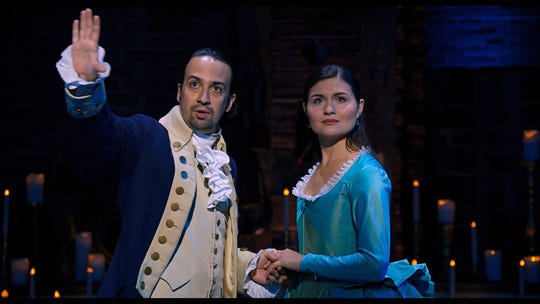 Sure, it comes with several asterisks attached, but "Hamilton" — the filmed version of Lin-Manuel Miranda's stage phenomenon — is the biggest hit of the summer movie season.

And before we simply write it off as an anomaly, a byproduct of the unpredictability of this calamitous year, maybe there are some lessons to be learned that we can carry with us going forward.

Now, about those asterisks.

In the traditional sense of the term, there is no summer movie season this year. Movie theaters are closed due to COVID-19, and movie studios are, for the most part, holding back their big guns and waiting for some semblance of normalcy to return before bringing their blockbusters out of hiding.

Another biggie to consider is the lack of concrete viewership figures. Sure, there are still weekly dollar figures being totaled every weekend, mostly from drive-in theaters, but things are so topsy-turvy that three of the last four box office champs were re-releases of old films ("The Empire Strikes Back," "Ghostbusters" and "Jurassic Park") and the other was "Becky," a low-level horror entry starring Kevin James as a Nazi who gets outwitted by the teenage daughter of the couple he's set out to torture. It's not exactly "Iron Man."

Most eyeballs are on streaming services, and streaming services don't report numbers to the public. We get trickles of information — "Palm Springs" set a new opening weekend record for Hulu last weekend, according to Hulu — but rarely do we get hard figures attached to those PR announcements.

The transparency of box office reporting has always brought a sense of democracy to the movie business, and made it easy to crown winners and losers depending on weekend tallies. With streaming companies keeping those figures close to their chests, we no longer have the luxury of hard information on which to base a film's performance with the public. (In a sense, the current situation is fitting of an era where facts are fluent and people can choose their sources of news.)

But purely based on buzz, no movie this summer has generated quite as much talk as "Hamilton," which debuted on Disney+ on July 3.

But in "Hamilton," there are no superheroes or explosions, and rather than watching mindless action on screen during our nation's birthday weekend, families gathered around their televisions and watched a 2 hour and 40 minute hip-hop musical about American history, in many cases more than once. It's a story about immigrants and representation, and it speaks to a number of relevant conversations happening in America today.

"Hamilton" was supposed to come out in October 2021 but was bumped into a prime summer streaming slot, in what is hopefully a harbinger of things going forward.

At some point, although it's a target that keeps moving, the movies will be back, and Marvel will return to dominating the box office with its family-friendly mix of humor, action, bright colors and hero stories. And the weird summer when we were locked indoors will maybe (hopefully?) become a memory.

But let's not forget "Hamilton," and the lessons learned from the at-home experience of this different type of blockbuster in this different type of year. The superheroes are all in hiding, yes, but it turns out that maybe we don't need them. The success of "Hamilton" shows that people will show up, or in this case tune in, to quality content regardless of the season. Summer doesn't have to be a mind-numbing escape. It can also be a time for cultural enrichment.