Bankole: Make Trump 2018 bogeyman at your own peril

It could be a fool’s errand to focus on the White House, instead of the quality of candidates, Thompson writes.

Bankole: Make Trump 2018 bogeyman at your own peril 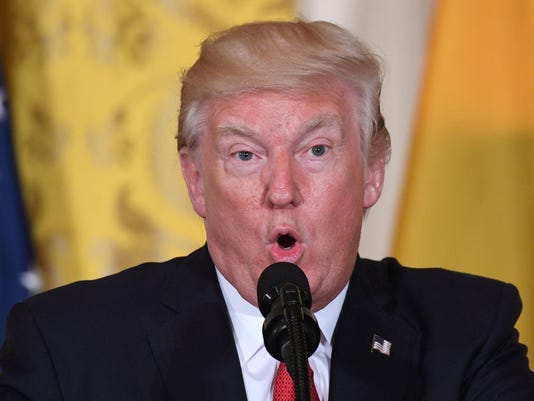 Trump will not be on the 2018 ballot, but everything he stands for will drive much of the campaign against Republicans, Bankole says.(Photo: Jim Watson / Getty Images)

Michigan Democrats can’t wait to make President Donald Trump an albatross around the necks of Republicans running for governor next year.

An email the Michigan Democratic Party sent out to supporters on May 18 says it all.

“The scandal unfolding within the Trump administration is like nothing we’ve ever seen in our nation’s history,” the email stated. Then came the punch line: “That’s why we are calling on Michigan Attorney General Bill Schuette to put duty first, set his political ambitions aside, and call for an independent, 9/11 style commission to investigate Donald Trump and his administration’s ties to Russia.”

Trump will not be on the 2018 ballot, but everything he stands for will drive much of the campaign against Republicans.

If Schuette, a staunch ally of Trump, runs for governor as expected, he will have a lot to answer for regarding the president even though his office is not at 1600 Pennsylvania Avenue.

The strategy of making candidates answer for the actions of those they support has worked before.

But it could equally be a fool’s errand to focus on the actions of who is in the White House, instead of the quality of candidates and their readiness to be the next chief executive of the state.

Making Trump the Republican’s bogeyman as opposed to offering concrete plans to give graduating college students a reason to stay in Michigan, or championing small business growth and a pragmatic urban agenda for Detroit and other urban cities is not a winning strategy in Michigan.

The race should be about who has the vision to lead the state.

The past two gubernatorial campaigns that Democrats lost badly should be instructive.

Neither Virg Bernero, the mayor of Lansing who was the 2010 nominee, nor former U.S. Rep. Mark Schauer, the 2014 flagbearer, appealed to a broader base.

Both contenders had serious messaging problems and their campaigns did not resonate in Detroit, the party’s largest base.

While it may be tempting to make Republicans pay for Trump’s sins, it would behoove Democrats to do some serious soul searching to surmise why they lost.

Determining why the ground shifted and defining a viable future for the party should be the thrust of any serious examination by the Democrats.

That should lead them to finding candidates who offer a compelling vision with an authentic message to tackle issues people care most about. That requires party leaders to refrain from making early endorsements and instead welcome as many candidates as possible.

But that is not the case.

Some top Democrats in the Michigan Legislature are already throwing their weight behind Gretchen Whitmer, the most prominent candidate in the race.

Whitmer’s campaign last week announced the support of 22 Democratic lawmakers in the state House and Senate including Sam Singh, the House Democratic leader from East Lansing.

Yes, Whitmer is a formidable candidate. She has already launched direct attacks at Schuette. And you can expect she will make Trump an issue.

But Hillary Clinton was also a formidable candidate with early endorsements from party heavyweights.

Yet she lost the presidential election in states she was supposed to win, including Michigan.

Clinton even lost the state primary to U.S. Sen. Bernie Sanders whose vigor, passion and authenticity powerfully connected with disenfranchised voters who don’t see any difference between the status quo in both parties.

If leading Democrats are lining up behind Whitmer this early, it could spell trouble for the party if a Sanders-type candidate emerges.

Mark Bernstein, a prominent attorney with crossover appeal and a passion for civil rights enforcement, has been mentioned as a potential contender who could be a counterweight to the GOP.

A riveting message that organically connects with voters, not Trump, is what would elect the next governor of Michigan.

The writer hosts “Redline with Bankole Thompson,” which is broadcast at noon weekdays on Super Station 910AM. This column appears Mondays and Thursdays.