Column: Duggan caves in to back Whitmer

If you’ve been following the gubernatorial race closely, the endorsement was obviously reluctant, Bankole writes

Column: Duggan caves in to back Whitmer 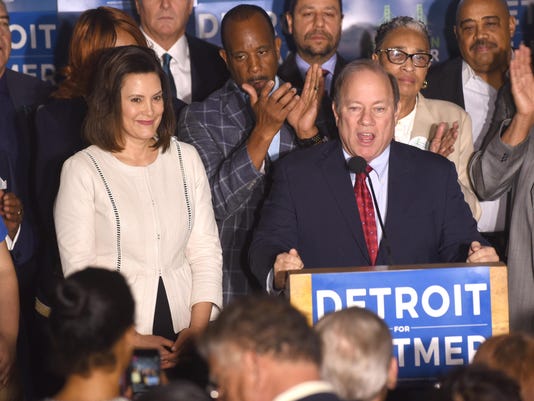 If an endorsement is reluctant, passive and unenthusiastic, it is in my view a negative endorsement.

But if it is passionate, rousing and timely, then it is a positive endorsement.

That is why the Mike Duggan/Gretchen Whitmer scenario appears to be a negative endorsement because it is coming as a last resort after all efforts to stop Whitmer failed. In other words, it is a marriage of expedience taking place ahead of the April 15 state party convention at Cobo Center.

But if you’ve been following the gubernatorial race, the endorsement was obviously reluctant, leaving some doubts about whether the mayor was demonstrating political solidarity or simply playing to public optics.

It was only a month ago that Duggan was reportedly seeking to replace Whitmer by finding other candidates to jump in the race to challenge her.

Reports of meetings Duggan and United Auto Workers union officials held to convince some of the state’s high-profile Democrats such as U.S. Sen. Gary Peters and University of Michigan Regent Mark Bernstein to consider entering the race created consternation among supporters of Whitmer.

Some of Whitmer’s supporters viewed those activities as an attempt to give the impression that she doesn’t have the standing to be governor and can’t win.

What was noteworthy during the endorsement announcement was that the mayor admitted that he did approach Peters to run against Whitmer because, “Sen. Peters, having run statewide, would have had an easier time of it, so we were looking into who could do it.”

But then Duggan quickly pivoted by saying, “Sen. Whitmer has never lost. I’ve always been a huge fan of Gretchen Whitmer and I’m really excited to be supporting her campaign.”

That doesn’t sound like a man who is banking on his candidate to win. If the mayor believes that Whitmer is a winner, then why would he try to recruit others to run against her?

I’ve asked Whitmer’s campaign repeatedly about why the mayor was working to find a challenger to their candidate. The campaign’s response is always to defer.

“Gretchen has a great deal of respect for the mayor and she is committed to being a partner to him as governor and to leaders across the state,” campaign spokeswoman Annie Ellison told me. “The city of Detroit deserves a partner in the governor’s office who can get to work on day one to improve our schools, job opportunities, infrastructure, insurance rates and neighborhoods together.”

Whether Duggan’s earlier subterfuge against Whitmer will be detrimental to her chances of getting elected remains to be seen; hesitation to endorse a major candidate is usually indicative of one’s doubts about the hopeful’s suitability.

The test now is whether the mayor will actively campaign for Whitmer or sit down and watch the process play out.

“We will not know what the mayor’s endorsement means until we see it in activity,” said veteran pollster Ed Sarpolus. “Does it mean money, troops and grassroots efforts and shutting out other candidates? The true measure is going to be whether Duggan will unleash his machine for Gretchen and lead fundraising for her.”