Duggan must wake up to diversity

The bottom line is that the buck stops with the mayor, Thompson writes

Duggan must wake up to diversity 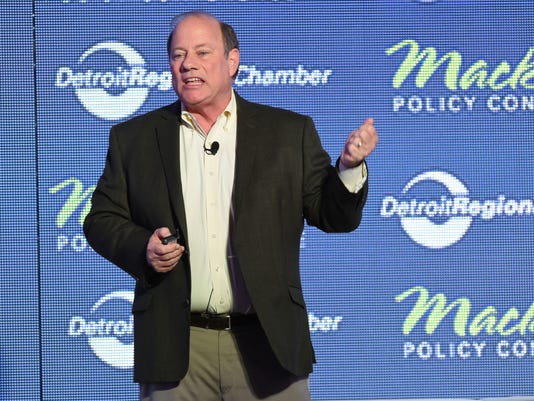 As the first white mayor since Coleman A. Young, Detroit Mayor Mike Duggan can learn a lot from the legacy of the late legendary mayor, Thompson writes.(Photo: John L. Russell, Special to the Detroit News/John)Buy Photo

I have to give it to Detroit Mayor Mike Duggan. He is a masterful and tactful politician. And like President Trump, he knows what to feed his audience, and how to make them walk away feeling compelled, guilty or wanting to do something about a particular problem.

That is exactly what he did last year during his re-election when he gave an unusual speech before a predominantly white audience on Mackinac Island about the history of racial discrimination in housing and other facets of life in Detroit, and the debilitating impact on generations of black Detroiters. During his remarks the mayor appeared resolute about fighting discrimination and ensuring fairness in the recovery of the city.

To this day, there are business influencers who share with me that the mayor’s speech is one of the most memorable Mackinac experiences for them for the painful truths contained in it.

But looking back, Duggan’s Mackinac presentation before an elite audience that is inclined to accept whatever he says as gospel was nothing more than electioneering, as a new report last week indicated that the city’s own demolition program lacked serious diversity. The report stated that only 16 percent of the federal Hardest Hit Fund has gone to black-owned companies and overall minority participation in the program is about 26 percent.

Let’s get this straight. Detroit is a predominantly black city, and for a program of this magnitude to operate without significant minority participation is appalling. It is inexcusable and a disgrace for an administration that claims that it is working toward ensuring that Detroiters meaningfully participate in the economic boom taking place. It also calls into question the moral fortitude and conscience of the Duggan administration when it comes to issues of justice and fairness.

If Duggan was serious about tackling this problem, he would have ensured that at least half of the participants in the blight program are minorities. He would have made sure that any policy that stands to cripple the efforts of minority participation is either eliminated or modified toward inclusion.

Duggan himself attested to the fact that for too long blacks have been deliberately and systematically excluded from opportunities as part of the true history of Detroit. After his Mackinac race speech, the mayor told reporters that he was honored that blacks elected him as mayor and views his election as an enormous responsibility.

If that is the case, he needs to move with all deliberate speed and address this inclusion fiasco.

The mayor should not give the appearance that he has set his eyes on other things and doesn’t care about how blacks and other minorities are faring, even though he succeeded in getting the city’s ministers to give him a no-questions-asked endorsement last year to show that he has black loyalty.

As the first white mayor in 40 years since Coleman A. Young became the first black mayor, Duggan can learn a lot from the legacy of the late legendary mayor, who demonstrated an unwavering commitment to diversity and inclusion and breaking down the chains of institutional bias. Young has had a lasting and generational impact on the city. That is largely because he was intentional about diversity and made it such that it could not be ignored.

But Young also challenged business leaders to step up and do more for African-Americans.

The city’s struggle with diversity and access for minority contractors is nothing new. But the issue is even more pronounced now and has greater significance at a time when many feel left behind in the revitalization.

The city cannot demand that corporations make diversity a cornerstone of their mission when the city itself is failing woefully in that regard.

There is no reason why Detroit in 2018 should be in a regression, not a progression, mode on inclusion as the demolition’s numbers have shown. Detroit should be a diversity leader, not taking the back seat.

The bottom line is that the buck stops with the mayor. The message from his office should be clear, unequivocal and intentional that diversity should not be optional. It should be a mandate.