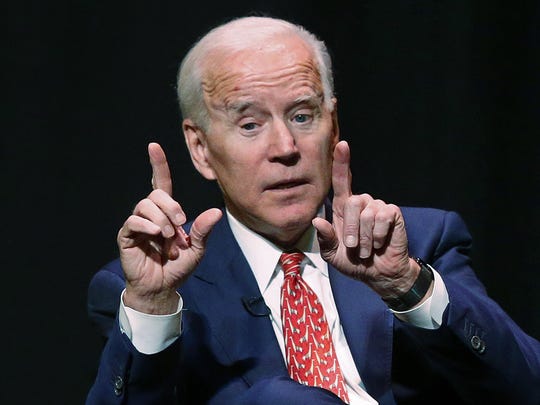 Former Vice President Joe Biden has been conspicuously absent from early voting states as he weighs a 2020 presidential campaign. That makes him an outlier among Democrats eying the White House. (Photo: Rick Bowmer / AP)

As the field of Democratic candidates seeking to unseat President Donald Trump expands, the identity crisis inside the Democratic Party about who is best positioned continues. The candidates who have announced are struggling to define what really matters to voters, and how to present themselves as individuals with crossover appeal across the political spectrum.

The most glaring example of this is the political skirmish playing out on issues like reparations for black enslavement, which is revealing some serious deficits among such high-profile candidates as U.S. Sen. Bernie Sanders, I-Vermont, who is reluctant to fully endorse reparations. Even though he talks a lot on the campaign trail about economic justice and creating a revolution on Wall Street, Sanders has been struggling to embrace reparations for blacks, who are a core Democratic voting bloc.

Also, the candidates who have been traveling the nation have yet to offer a compelling and captivating vision for the nation beyond repeating the scandals that have rocked the Trump presidency in the last two years. Some of them are acting as if the full public report from special counsel Robert Mueller will seal the deal for them in 2020.

Others are waiting on former vice president Joe Biden to save the day by entering the race. CNN and other news outlets are building up speculation about a Biden candidacy with a report last week that political superstar and former Georgia gubernatorial candidate Stacey Abrams could be on his ticket. That has some Democrats in a trance and waiting patiently for him to finally make the announcement.

Democrats would be foolish to think that Mueller’s report or a Biden candidacy will be just what they need to regain the White House. Biden, for example, is not a sharp contrast to Trump — they both have white, working-class appeal — and his Scranton story is worn out. He has a lot of baggage when it comes to votes he took in the U.S. Senate. Despite his sagely stature, he does not represent the future of the party nor the aspirations of those who want the party to truly reflect a rainbow nation.

Most importantly, Biden will not attract any new voters — especially millennials — and expand the base like former president Barack Obama did in 2008 and 2012.

Above all, Biden will have to answer to issues surrounding the 1991 confirmation hearings as then-chairman of the Judiciary Committee when attorney Anita Hill came forward with sexual harassment allegations against Supreme Court Justice Clarence Thomas.

Biden, who has recently given half-baked apologies for not appearing to give Hill a fair hearing at the time by bringing in more witnesses in support of her allegations, will have some more explaining to do.

In fact, the issue could prove very problematic in the #MeToo era, and underscore the implications and double standards of race. It will ignite debate about how black women and other women of color are treated or perceived by powerful white men when they come forward with sexual misconduct allegations.

For some in the black community, where Biden will be expected to woo support for a successful White House run, his conduct of the Hill-Thomas saga will boil down to this: He threw a black woman under the bus and now wants our vote. That will be difficult to shake off.

As past elections have shown, black loyalty to Obama’s presidency did not automatically translate to support for anyone he endorsed. Hillary Clinton’s candidacy exposed the fallacy that blacks will just line up for any candidate endorsed by Obama no matter their message and the contradictions that define their political careers.

What that means is that having the backing of Obama does not mean any white liberal Democrat has a black card that they can carry around to every town hall meeting in urban centers without a plan to address poverty and inequality.

The Democrats' biggest test is 2020. If they have no strategy and Trump prevails, they will have to change their name and rebrand the party.

And if they are expecting Biden to be the one that can defeat Trump, they need to look into the 2016 rearview mirror and carefully assess what their message for 2020 should be.