This technology appears to be the equivalent of “Big Brother,” Bankole writes

There is no real empirical or data-driven explanation that gives credence to the use of facial recognition technology in Detroit as a very successful method of nabbing criminals and controlling crime. Most of the data that is out there about this new evolving technology that captures faces of people in real time shows that it has the high propensity to be faulty, and to falsely identify blacks and other minorities as suspects when looking for a culprit.

Some studies have shown that the artificial intelligence of the software used in facial recognition creates repeated errors when trying to identify blacks and other minorities than they do for white men. In fact, during a congressional hearing in May before the House Oversight Committee, Joy Buolamwini, a computer scientist at the MIT Media Lab and the founder of Algorithmic Justice League, a group that is pushing for more inclusion in the artificial intelligence industry, underscored the risk of the technology. 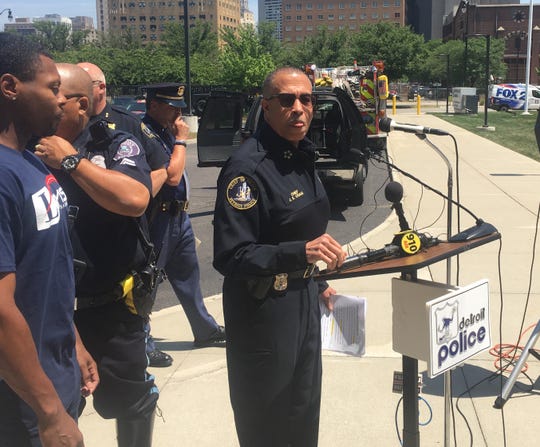 “If you have a case where they’re thinking about putting, let’s say facial recognition technology on police body cams in situation where you already have racial bias, that can be used to confirm the presumption of guilt even if that hasn’t necessarily been proven. Because you have these algorithms that fail more on communities of color,” Buolamwini said.

The use of facial recognition technology to keep the streets of Detroit safe is nothing but a public relations stunt by Mayor Mike Duggan’s administration to give the impression that it is engaging in aggressive policing to catch the bad guys at a time when people are getting shot every other day.

This technology appears to be the equivalent of “Big Brother” — the invasive, frightening and totalitarian character that the British political writer George Orwell wrote about in his book “Nineteen Eighty-Four,” because it stands to be a powerful surveillance tool that could be abused for reasons other than strictly addressing public safety.

The city of San Francisco, in a recent forward-thinking move, banned the use of facial technology in a sweeping measure called “Stop Secret Surveillance Ordinance,” which was not only significant for the value it placed on safeguarding the privacy of its residents, but also how it underscores the importance of civil rights.

“The propensity for facial recognition to endanger civil rights and civil liberties substantially outweighs its purported benefits, and the technology will exacerbate racial injustice and threaten our ability to live free of continuous government monitoring,” the ordinance stated. “Whenever possible, decisions regarding if and how surveillance technologies should be funded, acquired or used and whether data from such technologies should be shared, should be made only after meaningful public input has been solicited and given significant weight.”

Detroit has yet to conduct an exhaustive public debate on the issue, even as police Chief James Craig last week tried to offer an unconvincing and non-scientific response about the use of the technology.

“People are arrested based on sketches all the time. But if further investigation reveals that’s not the suspect, they are released. That’s the same with facial recognition,” Craig said.

His explanation is a ready invitation to litany of lawsuits that could be filed against a police department that’s already dealing with racial issues for possible wrongful arrests. Detroit has been paying out a lot of money in cases of police brutality, and this program is only going to increase taxpayer bills.

Duggan and Craig need to pull back from this dangerous surveillance program because it will create more problems for the city than actually solving crime. The mayor has shown he doesn’t sometimes seem to back down easily on issues that draw public scrutiny. But this is not the kind of program to sell to Detroiters when he’s running for reelection.

Maybe Duggan needs to send a team to San Francisco, the home of Silicon Valley, to find out more about why it decided to ban the technology. Maybe, just maybe, the administration will have an appreciation and respect for the privacy of residents and adhere to the principles of civil liberties.

At a time when there is increasing concern about privacy and security, Detroit should be leading the way forward, not backward with a technology that remains highly questionable for its classification of blacks and other people of color.